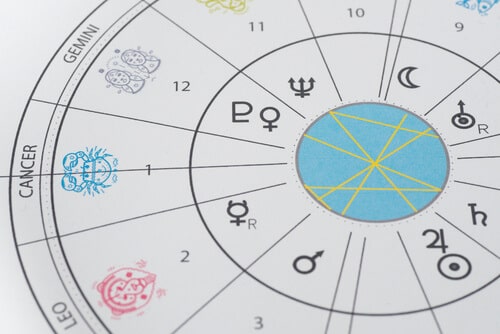 The chances are that if you have made it this far on an astrology website, you know pretty much a lot about how astrology works and what purpose a natal chart has. One single phrase that every astrologer believes in has been the main pillar giving strength to the building of astrology so far. It says: as above, so below. This small phrase is a testament to the astrological fact that all the planets and celestial bodies that are in action in the skies and the galaxies have a direct impact on the happening of the earth.

As above, so below; implies exactly that, meaning whatever is happening in the skies, gets translated on to the earth, and even though it may not be the same as a planet rising into a particular zodiac sign, the astrologers can indeed translate it to predict the future as well as the personality traits of any person and how he might react to a certain news or event. There are various building blocks in astrology that take root from this belief. Some of these include the twelve zodiac signs (also called the astrology signs), the twelve houses, the four elements, the concept of being born on the cusp, and also, the natal chart.

In some cases known as the birth chart, the natal chart plays a very important role, perhaps the most important one, in astrological predictions and all relating to them. You have to be already familiar with maps and graphs, and charts, because if you look closely, a natal chart is just that.

Astrologers believe that at the time of any event in the world, just like the birth of a person, all the planets are going through a particular zodiac sign. This includes the sun and the moon as well. A natal chart’s job is to map out the position of every celestial body as to what sign it is going through at the time of a particular event. And as the basis, all the rest depends on which sign each of the planets has at that time.

While astrologers show great accuracy in predicting your personality and future based on just the zodiac sign of yours, it is important to understand that the knowledge of those signs comes through these very natal charts. The horoscope dates that show how each sign has a month, also are a direct descendant of the concept of natal charts.

The planets are in a constant orbit, right? Of course! Well, this simple knowledge lets you not just see where a planet was at a particular time in relation to the earth, but also let you predict where it will be at an exact moment in the future. So while a few people believe that using a birthday calculator to bring out a natal chart is the only use that it has, they might be in for a surprise.

Since the centuries of its inception, types of astrology have greatly varied and wandered into many different directions wielding many kinds of results. One such wanderer discovered that while it was pretty useful to predict the personality of any person born on a date by making his or her natal chart, it may as well be possible to predict the success or failure of any future event with the same method. And it turned out to be a good thought! Just like a birth sign generates a natal chart of the positions of the planets, any future date and time can be used to generate an astrological chart which again shows the positions of the planets at a time in the future. With the zodiac signs involved then, one can easily predict the outcome of that particular event too.

Various online free astrology natal chart generators can help you see exactly what astrology sign each celestial body was in at the time of your birth. They can even go on to give a detailed report of your personality analysis. They require only a few simple details. These include your gender, your date of birth, the year you were born in, and also, the time of your birth. It is easily understandable which one is the most difficult to acquire since more than 75% of the United States population does not know what time they were born at. This is not as a great cause of worry as you think, though.

Often, you can find the time of your birth on your birth certificate. But if that is not the case, try contacting the Vital Records office in your city or state. This is important because, and you may as well understand, all of the planets and celestial bodies are constantly in motion, and it is equally possible for them to change a sign at any hour on any date.

However, in case it is hopeless finding your time of birth, you can take 12:00 of the noon as a standard time for the closest approximate analysis of your personality. It is imperative, in actuality, to know which is your rising sign, or the ascendant, and also the houses your planets fall in, which all are dependent not on the date but the time of your birth.

This section is only an extension looking into the concepts of natal chart astrology. Just like all the branches in astrology do, the natal chart itself also follows the Theory of Synchronicity. This might be a fancier word to describe as above, so below.

However, the point we are trying to make here is different. We explained how being born on the same date does not necessarily mean that two different people might have the same personality, because of the difference of time involved. This time difference, in turn, causes a difference in the ascendants of the planets and the houses they fall in. Let us now make another such interpretation. Consider two children born on the same date.

No astrologer claims the types of astrology and their methods to be supreme. And it is very important for everyone following astrology to realize that it should never be taken as the final word. This is because no astrologer can be expected to fully read the situation of the stars, especially when there are so many of them we still do not know about or cannot see even with the most powerful of telescopes.

An important factor, again, is that of culture. It is so important that different cultures even give birth to different types of astrology, and all of them are regarded and respected by astrologers in the same way that they regard their own. A prime example is that of the Chinese astrology, which is now popular all over the world.

However, what we intend to answer here is that if two people are indeed born on the same date at the same moment, their lives may still turn out different if it is different places they are born in. This is thanks to many different cultural practices that help form one’s opinions of the world. There is still a great possibility that the overview or basic outlook of their opinions may remain the same. As any Libra always tends to look out for balance in the world. This often leads them to a political stance of centrism, earning them a reputation of being dishonest because they can’t choose a side freely.

However, all they are trying to achieve is a peace method by pleasing both the parties. This is pretty much the same case for people born in different areas but with the same time of birth, that while their natal charts make them face struggles with the same root cause, their answers might be a tad bit different from each other based on their upbringing and surroundings.

Astrology suggests that before you go on to read someone else’s natal chart for them, you go on and read your own. This is because there is a very high chance you might get to see what kind of a client you might be facing if you take up astrology as a profession. Moreover, it is very important that you at least know how to interpret your natal chart before you go on reading other people’s for them.

What follows is perhaps the best way for any beginner to learn to interpret a natal chart. Once you have one, which can easily be found online through many free generators that only require your date, time, and location of birth, you need to start with the ascendant. This is also sometimes known as the rising star.

Seasoned astrologers believe it to be the exact demonstrative of the first breath a child takes when he enters this world. It is also the point that will continue to define our physical health throughout our lives. As a result of this, one can expect the first house to be a necessary and permanent part of one’s character outline. The first house and its ruler thus bring about a detailed reading into the positive and negative aspects that the rising star or the ascendant brings about in one’s life.

This is exactly the kind of answers one requires from an astrologer, as to what superpowers one’s zodiac sign gives them and what negative traits they need to be aware of and keep under control. Such is the importance of the ascendant that it is the only part of a natal chart that perhaps requires the most of reading into.

However, before you go on making connections and predictions, it is important that you have all the background knowledge with regards to the dignities, the symbols that each of the planets exhibits, and how very important the first house is in determining a person’s nature in the world he has stepped into.

Once done with that, when reading an astrology natal chart, it is very important never to forget how every person in this world has as their sole representative celestial body, zodiac sign, and house to their name. The whole circle that is the birth chart has not one small nook or corner that is useless or does not have a specific meaning.

However, like every other science, that of astrology is also constantly evolving, and for now, when astrologers don’t have an answer for every single dot on the astrology natal chart, they adopt another method which can commonly be called something like connecting the dots. This is only because some things are still beyond the knowledge of a human being and thus needs alternative ways to decipher them.

Before we end this…

With that being said, and the importance of a natal chart fully described, as we mentioned before, astrology is never the final word. One’s upbringing, their culture, and their surroundings play a very vital role in helping people form personalities and opinions. This is why astrologers always tend to ask for the location of one’s birth to get a better grip over their answers. Till then, keep finding answers, because that is the ultimate quest that the human race is after!