The Suit of Pentacles Tarot Cards 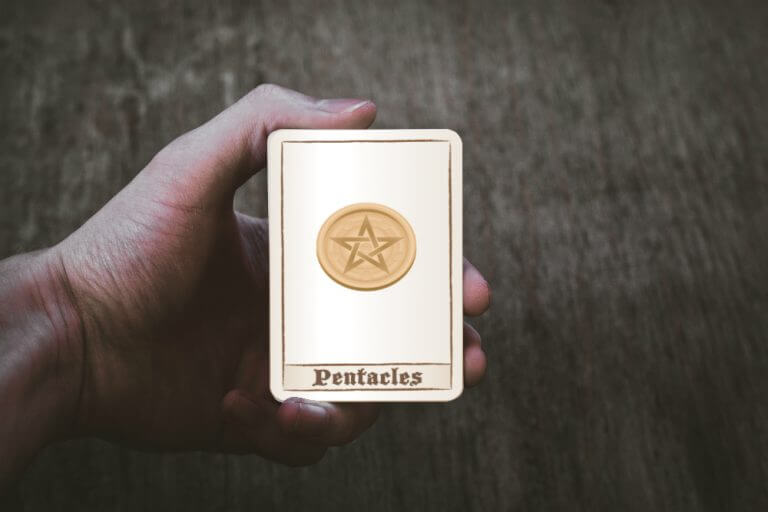 The divinatory tarot equivalent of the suit of diamonds in a playing cards game, this feminine energy suit represents stability, nature, and growth. Associated with the element of earth, most of the traits traditionally connected to that element can be found in the suit of pentacles too.

Minor Arcana cards from the suit of Pentacles in a reading

When a tarot reading displays a majority of the suit of pentacles cards, the meaning of the tarot cards usually represents a period of growth and long-term planning in the Querent’s life. The earth is an element that nurtures, supports, and encourages life in every shape and form. The stable and pattern energy found in the suit of Pentacles is also strongly connected to the professional life and finances of the Querent. This is why it is no accident if the second most commonly found name for this minor arcana suit is the suit of coins.

The positive aspects of the Suit of Pentacles

When combined with positive aspect major or minor arcana, cards from the suit of pentacles in a spread usually represent a way to ensure that the positive elements brought by the other cards will be consolidated and protected, in an obvious effort to turn short-term blessings and happiness into long-term, sustainable assets.

An iconic example of this two-step symbiosis between the tarot card meanings would be to imagine someone who just won the lottery. If the other cards in the spread represent the surge of luck, finances, and happiness brought by the winning lottery ticket, the presence of cards from the suit of Pentacles would represent the wiser, long-term decision to put most of that earnings into a savings account, to let it grow and multiply, and ensure this stroke of luck will bring long-term benefits and comfort instead of being spent in a rush and without looking ahead.

A predominance of cards from the suit of Pentacles in a reading could also highlight a particularly positive environment at work, heralding a potential promotion or highly successful professional projects or deals.

The negative aspects of the Suit of Pentacles

There is a difference between wise investments and excessive hoarding. When many cards from the suit or pentacles are drawn reversed, or combined with other negative cards, it could be a sign that the Querent might be prone to greedy and possessive behavior patterns.

Wanting to secure a safer and comfortable future is commendable, but not if the price is excessive greed, selfishness, or withdrawal from the world. If all one person cares about is the state of their bank account, they miss out on actually living their lives and will lose themselves projecting their happiness into a brighter tomorrow that will always stay out of reach. It might also have disastrous consequences on their friends and family if they neglect meaningful connections to spend more time with their hoard of prized possessions.

Usually, these people are more quiet and methodical than other people, and even when they let themselves go or follow their dreams they will always find a way to keep their feet on the ground. Building a family can be important for them too, but usually, they will put their career first when defining their priorities in life.

The Ace of Pentacles relationship outcome is usually positive. Indeed, the strong sense of stability and long-term success found in that card can be adapted to a long-term romantic relationship.

The other meaning of a reversed two of Pentacles might refer to someone making a spectacle of themselves, or putting on a show to hide their true feelings and emotions.

Three of Pentacles represents a desire to build something that will stand the test of time, something larger than what the Querent or subject of the reading might achieve on their own.

If the Four of Pentacles is combined with more “social” cards in a tarot spread, the conservative elements can be adapted in that context too, dealing with someone who would rather spend time with longtime friends instead of meeting new people, or someone feeling responsible for someone else.

The core Five of Pentacles meaning is the most obvious one you get when you look at the card. This minor arcana conveys a notion of poverty, destitution, and overall lack of funds and resources creating a difficult situation for the subject of the reading.

When the upright Six of Pentacles is drawn in a tarot spread focusing on love, it usually draws a parallel between the usual reading of the card, concepts of selflessness and generosity towards the poor, and the loving kind of devotion one can feel towards their partner in life.

While the Seven of Pentacles usually makes the most sense in a reading focusing on money or material goods, it can also sometimes appear in a tarot spread focusing on love or relationships. In that case, a parallel must be drawn between the usual materialistic meaning and the romantic context.

On a more psychological point of view, a reversed Eight of Pentacles embodies sentiments of frustration and tediousness, usually as a mirror of someone’s growing suspicions and lack of concrete evidence.

A reversed Nine of Pentacles in a reading has a much different meaning from the upright one. The air of confidence and satisfaction detected on the main character now turns into excessive pride, smugness, and arrogance.

An upright Ten of Pentacles in a love-based reading or tarot spread is extremely positive, turning love into something long-term and far-reaching.

The Page of Pentacles often represents a driven young man, probably a student or scholar of some sort. Usually, he will represent someone in a state of transition from being a dreamer.

The Knight of Pentacles often represents a middle-aged conservative man, one that might embody the traditional archetype of the family man who drives a large sedan or hatchback.

The Queen of Pentacles often represents an older and wiser woman (not an elderly, obviously, but not a young inexperienced girl either) who has a lot to offer, and of a kind and caring nature overall.

The King of Pentacles often represents a rich (or at least financially comfortable) middle-aged man, with a conservative streak and a careful and slow demeanor.

Final thoughts on the Suit of Pentacles

Like Mother Nature, the element of Earth represents the firm soil on which life can grow. It represents the solid foundations, the rocks you can count on when you plan ahead and decide your path in life. The suit represents a quiet, feminine energy that takes its time to build something that will last and stand the test of time.

The suit of pentacles provides solutions to anyone willing to work to secure a better future, or to turn fleeting possessions into valuable assets, something to rely on in time of need. In a world that keeps getting more and more competitive, the suit of Pentacles is here to lead the way and make the right professional decisions to navigate the whims of the market.