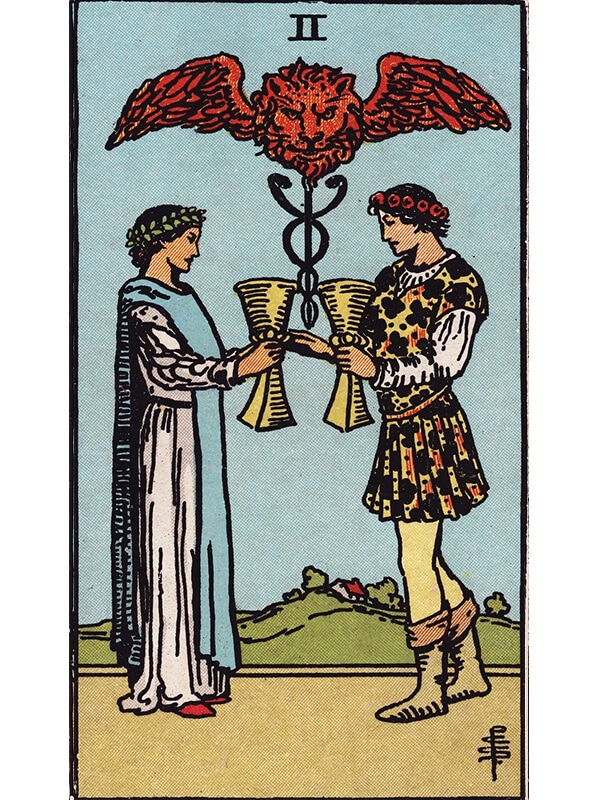 The numerological concept of duality found in the number 2 combined with the strong emotional affinity of the suit of cups combine in this minor arcana to create a minor arcana meaning for love and romantic bliss at its core.

A sublime osmosis between different beings who complete one another while retaining their own identity and differences, the kind of love stories embodied by the Two of Cups are what the most romantic Hollywood movies are made of. When reversed, usually love only flows one way and this is something that should be respected to avoid lingering feelings of rejection or pointless arguments. Love can only grow when it is free.

In the Rider Waite Smith tarot decks and most of the modern decks that it inspired, there are two characters on the Two of Cups, a young man, and a woman, each with a chalice in their hand. They look at one another longingly while the Caduceus of Hermes stands in the background behind them, with an unusual lion’s head on top of it.

In most colored versions of the Two of Cups of the minor arcana, the colors of their clothes don’t match but are in almost complete opposition (warm colors vs. cold colors) in order to enhance the duality between these two people.

As the logical combination of the numerological duality of the number 2, and the emotional energy channeled through the suit of cups, it is quite easy to guess that love will be one of the most important elements when trying to understand the tarot card meaning of the 2 of Cups. This card covers most aspects of love, from true love at first sight to fleeting moments of love and happiness shared between friends or lovers.

While love is the main concept that can be linked with this minor arcana, most kinds of relationships between two people technically also fall under that card’s meaning, from simple friendships to family ties.

The only additional common denominator between all these concepts is the mutual affinity felt between two people, romantic or not. As such, the Two of Cups is a perfect introduction to the core of the suit of cups, highlighting the inherent duality in all things.

When the Two of Cups comes up in a tarot reading focusing on love, it is usually a very good sign and represents two people who truly complete one another on several levels. A spiritually inclined person might call it to love at first sight or “True Love”, but even more down-to-earth people would have a hard time denying the obvious chemistry between those two people.

Career encompasses school and education, if that is your current stage; work that is necessary, but not what you would consider a career path; and your actual career path.  Regardless of your current stage of development, the Two of Cups shows up to have you pay attention to developing relationship that will help you succeed.

If you are a student and this is your card, then focus on an instructor that you enjoy learning from, one who could write you a letter of recommendation when you graduate.  You may also have a peer who helps you study and keeps you going during the ups and downs of academic life; give them some extra attention.

If you are doing work that is necessary, but not a career, then you want to support the co-worker who supports you the most.  You may need to tag team on work assignments or just keep each other in good spirits while getting through a tough work day.

If you are in your career, then the Two of Cups encourages you to focus on the individual who helps you the most in your career success.  This could be a special employee, a friend in your line of work, or someone outside work who keeps you positive and helps you stay excited about what you do.

When reversed, the Two of Cups is a sign of a lack of balance between two elements, usually generating arguments between the involved parties. It can also represent a refusal to take part in the social environment of a partner, and obviously be a sign of unrequited love. The social connections usually flowing through the suit of cups are disturbed, leaving a fertile ground for arguments of all kinds.

In a professional context, a reversed Two of Cups might highlight the downsides of a forced partnership between two colleagues that are extremely incompatible in their methodology, something that should be avoided because this work in tandem might be even less effective overall than having these two people work on their own.