The Suit of Cups Tarot Cards 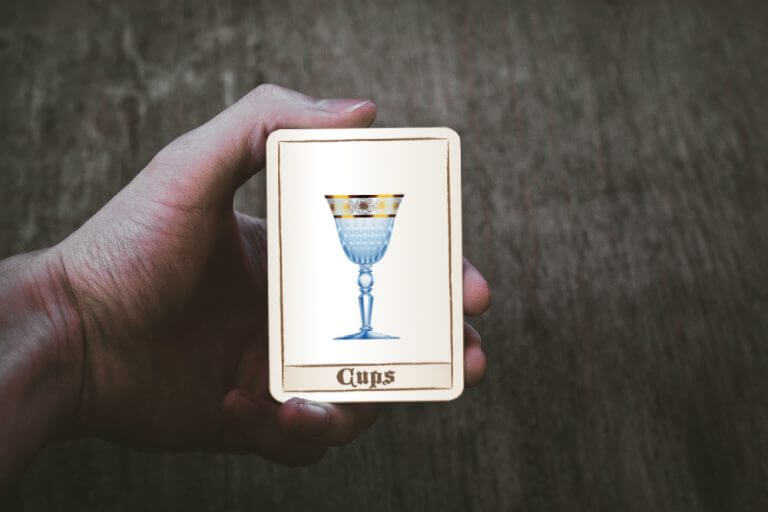 The divinatory tarot equivalent of the suit of hearts in a playing cards game, this feminine energy suit represents anything related to emotions and feelings. Associated with the element of water, most of the traits traditionally connected to that element can be found in the suit of cups too.

Minor Arcana cards from the suit of cups in a reading

More than any other suit in the divinatory tarot structure, the suit of cups is intimately connected to feelings, emotions, and all kinds of connections with other people, from family and friends to romantic interests. When cards from the suit of cups are prominent in a reading or a spread, it usually means that the Querent is currently in a deeply emotional state, which can either be a good or a bad thing, but usually hints at biased decision making or impulse reactions put into practice without taking the time to understand what their consequences might be.

The positive aspects of the Suit of Cups

While material comfort and stability, and intellectual achievements are important when someone is building their own identity and life, emotions are often the driving force behind these goals and project. Most people would agree that a life without love, family, or friends would be a tremendous way to “miss the point” and lead an unfulfilling life, no matter how successful in every other aspect.

In a positive context, the suit of cups can represent all the happy emotions one can feel, but also covers all the other aspects of life that are driven by emotions or distilled from them. Just like the suit of wands, this is also a sign of creativity and imagination, though it does not carry the urge to create something lasting and tangible from it. An abundance of Cups card could just as well refer to a happy daydreamer.

The suit of cups also highlights the various social relationships of the Querent, so in a positive context, it might be a sign of meaningful connections with your friends or family or quite obviously living a wonderful and fulfilling romantic relationship with someone you really care for.

The negative aspects of the Suit of Cups

Emotions left unchecked can be extremely destructive. Like the element of water left unchecked, a tsunami of emotions and feelings can have serious consequences on the life of the Querent.

In a negative context, the suit of cups can represent the thoughtless rage or distress that arises when emotions take over the decision-making process and the person has been hurt in one way or another. The heart overrules the brain and can lash out at anyone, even when they have nothing to do with the matter at hand.

Combine with other passive or isolation cards, it could also represent the downside of being a daydreamer, someone getting lost in their own imagination and escaping the harsh reality of truth by withdrawing from the world and spending more time on their own, in a mental mindscape they have designed for themselves.

When you try to draw a parallel between tarot cards and the science of astrology, the minor arcana in the suit of cups are connected to the three astrological signs thematically connected to the element of water too, namely Cancer, Scorpio, and Pisces.

People born under these astrological signs usually embody the traditional aspect of the suit of cups. Emotional, caring, full of love and imagination, people who embody the values of the suit of cups stand at the heart of any social circle. Most artists usually come from such a crowd, learning to distillate their own emotions into art that can be shared with the rest of the world, something that other people will instinctively understand on a very primal level.

The Ace of Cups is probably one of the best cards that can be drawn in any spread or reading focusing on romantic love. Indeed, in that context, it highlights a surge of emotional bliss coming from that feeling of love.

When the Two of Cups comes up in a tarot reading focusing on love, it is usually a very good sign and represents two people who truly complete one another on several levels.

While the Three of Cups is usually an encouragement to let oneself loose when it appears reversed in a reading it usually deals with the consequences of such behavior when it is left unchecked and brought up to excessive levels.

Rather than inverting the traditional meaning of the Four of Cups, a reversed four of cups in a tarot reading even further accentuates the various downsides and negative elements of the most basic meaning of the card.

Usually, the Five of Cups has a sad posture of the character, combined with a long and ominous black cloud, tends to refer to the upcoming funeral of someone important to the Querent.

There are two possible interpretations when the Six of Cups is drawn for a love tarot reading. The first simply suggests that the Querent is constantly or almost constantly lost in their own memories.

While the Seven of Cups is a nuanced card in and of itself, when it is drawn in a love tarot reading the specific energies and meaning of the card are usually detrimental to a healthy and fulfilling relationship.

When the Eight of Cups is drawn in a love tarot reading, is usually comes to highlight the negative consequences of a former love or affair that has turned sour.

Drawing the Nine of Cups in a love tarot reading usually highlights the mental and physical pleasure shared with a significant other or lover.

When the Ten of Cups appears in a tarot spread focusing on love, it is a sign that the subject’s love life might well be about to turn into a romantic comedy movie.

The Page of Cups also represents one of the most effective ways to make sense of one’s own emotions and inner feelings, namely spending some time alone in meditation.

The Knight of Cups is a young adult that is easily approached and befriended. Contrary to the Page of Cups, he is an extremely loyal person, and will readily speak of commitment and dedication.

The Queen of Cups represents a fair-headed woman, introvert but caring. In a relationship, she will navigate her own emotions and those of her companion, making her an extremely receptive woman, and an almost perfect spouse.

The King of Cups represents an adult man in harmony with his own emotions and feelings, able to provide love, caring, and attention, but sometimes deliberately choosing not to.

Final thoughts on the Suit of Cups

The suit of Cups represents the importance of emotions and feelings to give meaning to any other aspect of life. Raw and unfiltered, it can lead to a kind of passive daydreaming that can turn into an obstacle to any growth or progress, but when properly channeled there are no limits to the creativity and flexibility provided by these minor arcana.

With a strong emphasis on social relationships, friends, family, and love, the suit of cups often represents the ultimate goals and reasons that justify all the other decisions made in life.