Tarot Reversals, Yes or No? 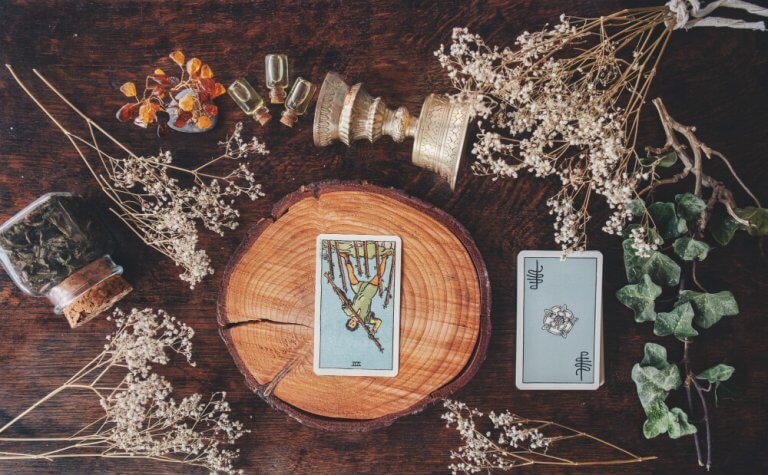 Tarot and oracle cards are powerful tools for exploring your inner development, getting an insight about people and situations in your life, and critical thinking.  Since the 1990s decks have been published in staggering abundance and there are hundreds in print and currently available through mainstream online and bricks and mortar retail outlets. Thousands more can be found through online used items resellers and bricks and mortar new age shops and used bookstores. They have found their way, though rarely, into psychological practice and high art gallery presentations.  More often than not they will appear at some point in the story in a fantasy TV series or movie.

Doing a reading for yourself, getting a reading for yourself, or doing readings for others is and should be a sacred process. This article, and others I write on this subject, will explore the very serious and helpful process of using tarot and oracle cards, both personally and professionally.  I have been reading cards professionally since 1992 and have done thousands of readings. Over the period of my professional work, scholarly study, and personal use, I have learned many forms of knowledge about the cards and their use that I want to share with you.

Most tarot decks have backsides to the cards that have a uniform or consistently repeating patterns so you cannot tell when holding the card face down if it is upright or reversed.  So, depending on how you turn the card over will determine if it is upright or reversed.  In most cases, when reading for someone else, an upright card is one that is upright to the client and reversed to the reader.  I have seen readers that interpret the reversal based on the card being reversed to them.  It can be a bit of shell game, actually.

When a card is reversed it is treated a “hindered” or “blocked” or “functioning negatively”.  Generally speaking, it represents a negative rather than positive interpretation of the archetype of the card.  It is possible to interpret some of the more negative cards with something of a positive slant.  Consider the 10 of Swords, often interpreted as Ruin.  Reversed it could suggest there is time to fix a situation before it leads to ruin, or the situation is not as bad as you think, though it does appear to be very unsettling.

Most deck books will include a reversal interpretation, even the little pamphlets that come with many of the decks printed by US Games, Inc. Reversal meanings can enrich the reading process if the reader and the client have experience; otherwise, the quick impression can easily be, “something is wrong; I am in trouble.” I highly recommend you feel very confident reading the cards upright before tackling reversal interpretations.

As a general rule, I do not read reversals.  Instead, I prefer to offer a holistic interpretation of a card, which includes the “light” and “shadow” of the card’s meaning as a way to get the client to apply for the card as needed for his or her reading experience.  As stated above, a new person trying card reading for the first time can really be sitting down with highly impressionable openness that can immediately assume a reversed card means “something bad”.

I have been reading long enough and have collected enough decks to be able to say that I have read with some of the “heaviest” of decks, like the Thoth Tarot or Haindl Tarot, and some of the “fluffiest”, the Happy Tarot and the Whimsical Tarot.  Regardless, clients get what they need and can be moved just as profoundly by the Happy Tarot as by the Thoth Tarot.  I read quite often in public settings for people genuinely curious and, honestly, more than a little nervous.  And, truth to be told, the nervousness is not unfounded.  This tool is very powerful and can take you “by surprise”.  More than a few people who sat down to “have fun” experienced some instant and deep emotional activation.

For this reason, and in most cases, the reversed card can prove to be such an immediate distraction that clients cannot “get past” the fact that card is reversed to hear if the interpretation is actually useful and helpful.  To a certain extent, I find a reversed card restrictive in a way that can force a more deterministic and pessimistic perception even when the meaning has to do with reflection or thoughtfulness before acting.

That said when I work with more seasoned clients, or in some cases, when clients ask me to read reversals for them (and I have some with considerable experience that do make this request), I am more than happy to read reversed cards. The reversal interpretations are something of an enjoyable challenge to provide to these clients.

The 5 of Cups (upright) from the Ostara Tarot

Text from the booklet: The Five of Cups is a card that reveals your own disappointment, regret, and fear.  Though the card is a symbol of difficult times, it is also a call to change your actions.  The root of your regret or troubles must have a solution.  Don’t indulge any further into self-pity, but rather find the silver lining within your troubles. (83) 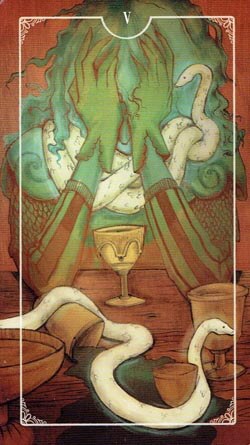 5 of Cups (reversed) from the Ostara Tarot

Text from the booklet: [Reversed] You have learned your lesson and have seen how to change your situation. The road to healing lies before you now that you are done indulging in self-pity.  Blessings and new opportunities are in your near future (83). 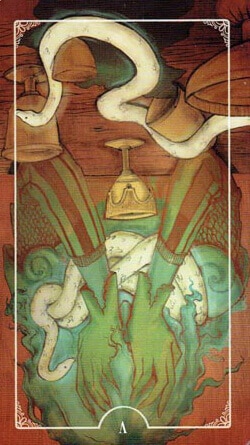 The 5 of Cups (upright) from the Ostara Tarot

Holistic Interpretation: There is a disappointment, regret, and fear you need to face and it will be difficult.  You are called to work your way through the process knowing that the drawing of the card indicates your opportunity to make lasting change.  While not guaranteed, a change in your perception is key and you need to shift from any form of self-pity or naysaying to more positive thinking that there is an important lesson that can bring you a blessing if you make the effort to change.

The decision to use reversals is really a card reader’s choice. I have found two decks that build the reversal concept into the very deck design. The Revelations Tarot is designed with a positive image on one half and a negative image on the other half and the Vice Versa deck has one traditional image on a side and another “reversed” or “alternative” perspective on the other side.  Outside of those two decks, and perhaps others I do not know about, most decks will leave it to the reader to use the reversal method of interpretation.