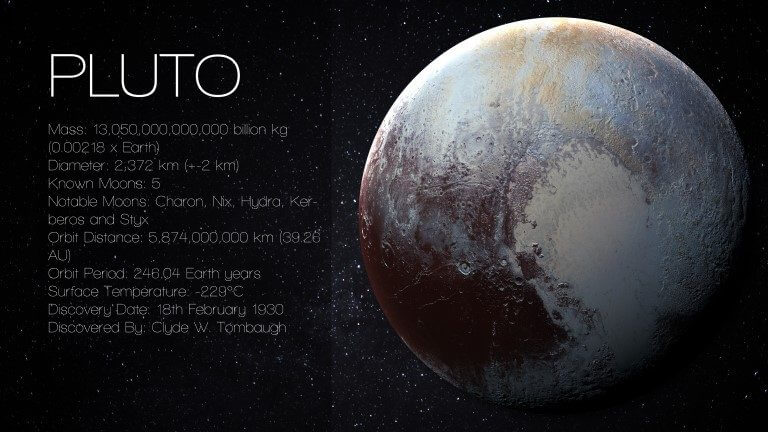 A significant planet that makes up the solar system is Pluto. But is it just one of the eight planets that complete the solar system or is there more to it? Today, we will explore another side to Pluto, Pluto in astrology. As you’re all already familiar, astrology is the study of the stars, planets, sun, moon and all celestial bodies.

The questions we’re going to try, and answer today are about how Pluto planet is perceived in the world of astrology, how it effects the horoscope, which horoscope it influences and any other queries that you might have in mind.

Some interesting facts about planet Pluto

Here are some run of the mill facts about Pluto that you might find interesting. When was Pluto discovered? It was much later than the other planets, in the 1930s. The surface temperature is about -229oC. Our planet has one moon, but this is not the case for other planets including planet Pluto which has five moons.

Who was the person who discovered the planet? It was Clyde W. Tombaugh. Surprisingly it isn’t named after him. So where does the name come from? It was named after the Greek god of the underworld. Another fascinating thing about the Pluto is that its one-third water. The remaining two halves are known to be rocks. The size of the planet is said to be very small, even smaller than some moons.

Is Pluto a planet?

There is a lot of confusion regarding Pluto’s status whether it’s a planet or not. Pluto was discovered as a planet back in the 1930s. However, over time discoveries were made, and the status was shifted to that of a dwarf planet. This happens in around 2006, 76 years after its discovery. What is a dwarf planet? It is a celestial body which appears to be like a planet, however, lacks some of the things that make it one. Confused? There is no need to be.

Although Pluto appeared to be like any other planet when it was discovered originally, over time with advances in science and technologies, discoveries were made that led to the conclusion that Pluto was not precisely a planet but rather a dwarf planet because of lack of some required features.

What does Pluto mean in astrology?

“Pluto in astrology” Before we can delve into any details, let’s start with the basic. Pluto is the ruling planet of Scorpio. So, the movements of Pluto directly influence people who have the zodiac sign of Scorpio.

In astrology, it is believed that the energies of Pluto are of transforming nature. If you learn to embrace them, they can have a positive influence on your life. Pluto astrology places it as a representation of a higher force that is above and beyond what exists in our world.

More about Pluto in astrology!

It isn’t just about energies and forces; there are other representations of the planet as well. Every person who studies Pluto has a varying interpretation of the planet and what it stands for. All of these are worth considering to have an overall view. Pluto in astrology stands for renewal and birth as well. It is symbolic of new beginnings and a chance to start over. But not all is rainbows and butterflies.

What we mean is that like all other things in life, there are two sides to the story. The one we’re about to tell you is the one less talked about. A shadow side to Pluto is about hunting power and becoming obsessive in the quest for it. Power can be used to bring good or to bring destruction, depends on who has it and how they decide to use it. These are some of the characteristics of Pluto that will give you an idea of its meaning.

We are pretty sure you’ve all been waiting for this section. We all are guilty of reading our horoscopes when no one is looking. You know what planet rules Scorpio; now we’ll tell you how it influences the life of a Scorpio. Scorpio is famous for being the sign of sex and war, and now that you have some basic knowledge about Pluto, you can very well draw the connection. Pluto is about power and destruction and energies.

There are so many energies at the same time and the same place that there is a danger of a meltdown. It may suppress a lot of things for a long time, but there will come the point when everything spills over despite the wall that has been put up to keep everything in. This will bring destruction more than anything else.

Pluto in Scorpio and what does it mean?

Scorpio zodiac sign has to keep sacrificing and giving up things to grow in life. If they don’t let go and keep holding on to the past or to things they hold dear, they will never be able to progress in life. Their soul will become dormant, unable to regenerate with the changing times.

Pluto has influenced the Scorpions to bring up taboo topics into the discussion. They have gone through the age of sex, aids, gun violence and so on. This has led to laws being passed and voices being raised about the issues at hand.

What role does Pluto play for relationships?

Those of you who have Pluto in their natal chart are naturally possessive. They like to be in charge of situations. Study of Pluto in astrology has shown that even in myths, he kidnapped Persephone from her mother so that he could keep her to himself. They like to own things and will go to any lengths to get what they want and keep what they have.

Pluto brings out their destructive, power-hungry side, so they are not afraid of confrontation. So, if you’re a free soul, being in a relationship with a Pluto will have its negatives. They will try to control your life, make your decision and keep you on a leash. This may be a deal breaker for most people, but other learn to tame the monster inside of them.

Pluto’s symbol has a meaning behind it. It is a combination of a circle, across, and a crescent. All of these have separate meanings. The circle is representative of the spirit; the crescent stands for the receptivity while the cross is for the matter. This doesn’t make any sense to you, does it? Let’s bring it all together to decipher the Pluto sign. It stands for a spiritual receptivity to a world that is much different and beyond ours.

This world is given different names in different studies including super worlds and super consciousness. The word super is meant to denote something that is bigger and beyond the grasp of the human mind.

This is however not the only symbol. Another one merges the letter P and the letter L. The P and L is the initials of the astronomer “Percival Lowell” who helps in discovering the Pluto. Whatever symbol you choose and whichever interpretation you choose to believe is entirely up to you. But it should be kept in mind that these are symbolic, meant to deliver a much deeper meaning. This meaning can only be understood if you truly open your eyes and mind to the truth.

Some positions of Pluto if you’re studying it!

The first one is also known as the domicile or the home base. This is when its influencing Scorpio. Next is the detriment stage when it mostly affects Taurus. Then there is exalted where it is in control of Aries and Pisces and finally, in the fall position, it’s responsible for Libra and Virgo.

All of these different positions mean different things. The easiest flow of energy is in the home base. In all the others, extra work has to be put in order to experience the true energy of the planet. The exalted position is said to be the most powerful position for the planet which can mean fortune.

When does Pluto take the back seat?

Is there any time of the year when the effect of Pluto isn’t intense? There are five months in the whole year in which you can escape the influence of the planet Pluto. But it isn’t about being free from the shackles of a tyrant, but this is the time that can be used for your own good.

You can study Pluto in these months, look back at the decisions you’ve made in the past and at the challenges that lie ahead.  You can learn from your mistakes and set hopes and dreams for the future. You can refresh your mind in this break, becoming a newer and better version of yourself. You can relax, it’s perfectly alright to give yourself some time to unwind and ponder.

Some things to keep in mind while studying Pluto!

We have studied the Pluto horoscope and Pluto zodiac. While there is no denying the influence of Pluto on the personalities and lives of those who were born Scorpio, it should be noted that these predictions and observations aren’t written in stone. They vary from person to person, and they change with the changing circumstances.

If you start to believe that good will happen just because of Pluto, or you’re destined for destruction because your zodiac sign is ruled by Pluto, then you’re mistaken. The way you act and the choices you make is completely dependent on you. It maybe be influenced, but it is still in your hands. You have to take control of your life and not wait on a planet to write your destiny, make your own path and choose your own destination. Then put all your effort and hard work to get there.

Pluto is known to amp up a person’s charm, but it can also make you more jealous and manipulative. You are the one who can draw the line between being charismatic and tricking someone into doing something they wouldn’t do out of free will. You might think that you’re just persuasive, but there is a difference between having a talent of persuading people to do what you want and being deceptive.

Be very careful about crossing it because once you’ve crossed it, there is no going back. Pluto’s placement in your natal chart may make this hard, but you have to try your best to follow what’s right and recognize what wrong.

In about 248 years, Pluto completes its orbit around the zodiac. It may have transitioned from a planet to a dwarf planet, but that hasn’t undermined the importance of Pluto in astrology. When you’re studying astrology or the solar system or the science behind horoscopes, a thorough study of the planets and their role in making deductions about the future is very vital. Planets come together to form our universe. But there is more to them than circular bodies orbiting in space. They have an effect on life on earth.

Whether you believe in this truth or not is up to you, but you can study it to find out interesting facts. Pluto may make you jealous, or it may drive your energies up. It may make you obsessive over your partner or give you the drive to achieve greatness. Either way, it is a planet worth studying and analyzing without which the study of astrology is incomplete.