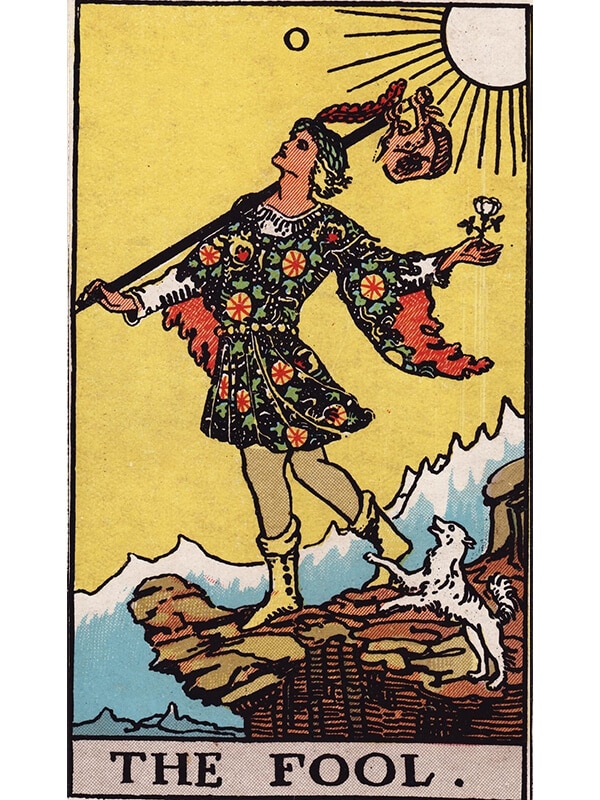 The Fool tarot card is one that varies widely from one tarot deck to the next. Some give it the number 0, someplace it at the end, at number 22. In his Pictorial Key to the Tarot, A.E. Waite even chose to place it between the 20th and 21st arcana. What are the meanings of the fool in tarot, and what can you understand when you encounter it in a tarot reading?

Astrologically, the Fool is associated with the planet Mars or the sign Aries.

While there are many different tarot decks, the common element found in most of them for the Fool in the tarot is a young, careless person, seemingly happy and unaware of a rather dangerous situation (often standing near a cliff, or next to wild animals, etc.). There is often a dog behind him, which seems friendly and just as carefree as The Fool, but can also be pictured as a growling menace in some tarot decks.

In the most current decks, artists and collaborators deviate significantly from the traditional image, while others mimic the Rider-Waite art.

The meaning of the Fool tarot card in most readings can be easily guessed from the usual behavior of the main character depicted on the card.

In commonly accepted major arcana meanings, the Fool represents folly, extravagance, even carelessness, but with a certain innocence that brings bliss and exaltation of someone living in the moment. As such, you often need to interpret the Fool card in the context of the reading; and the other arcana that were drawn beside it will often make the Fool meaning clearer. In a sense, this major arcanum can be seen as an amplifier of the general trend of the reading.

The number 00 card of the Major Arcana, the Fool, represents leaps of faith, carefree abandon, and optimism about love and relationship.  The Fool’s “come what may” attitude allows him or her to be open to every possibility and act with judgment, experimenting, and trying each opportunity that presents itself.

If you are single, this card will ask you to “trust the universe” that it now is the right time to be single, and when it is not, the person you need to be with will appear.  You do not need to push or pull in search of a partner, rather, you can just be.  Do what you want to do without looking for a relationship or trying to resist if one presents to you.

If you are in a relationship, this card encourages you to relax and trust that what the relationship is and needs to be will unfold without your prodding or attempts at control.  Be carefree and honest and open.  Let that “foolish” energy fill you and see what happens in the reaction of your partner.  There will be something profound to learn if you just accept what is and do what you want without malice.

If you are a student and this is your card, then you need to think about what you hope to get from school.  Perhaps you are “foolish” for going to school, or not going.  Either way, pursing higher education or going directly into the work force for the first time is a leap of faith, as is the belief that what you learn or do will give you what you want from life.

If you are working, but not doing something you would consider a career, then this card will encourage you to trust that your work is what you need right now.  Find ways to enjoy your work or enjoy yourself at work.  The Fool can “go with the flow” and make the most challenging situations enjoyable or stress-free.

If you are in a career path, then this card reveals the need to make a leap of faith regarding your career, most likely by jumping to a new career, company, or quitting altogether.  The Fool acts rashly in order to teach spiritual lessons when doing something that takes us out of our comfort zone.  It is time to “do that crazy thing” with regard to your career path.

When the Fool card is reversed, the negative aspect of this arcanum should be interpreted. The playful carelessness of the base meaning turns into negligence or apathy. It is a warning against neglecting your duties and hiding from the world. Where the main meaning is an amplifier, the Fool card meaning is always negative and bad news when it is reversed, and should not be taken lightly.

While there is almost no positive reading of this reversed arcanum, it should not be a source of grief but rather seen as a warning to put your head back in the game and focus on whatever you are doing. It is never too late to realize what is at stake and do what needs to be done.

You need to realize you may be “acting the fool” or being “made a fool of”, neither of these circumstances will bode well for your relationship.  The card may show up to force you to see that you have “made a foolish choice” regarding your partner or lover.  It is time to apply some critical thinking and judgment to your relationship.  Remaining ignorant or uncritical is likely causing and going to cause problems.

When this card appears in a question about work or career, then you want to be on your guard and pay more attention to your work.  If you are coming up for review, signing a contract, or dealing with a work issue that is taking your time and energy, be diligent and focus.  Do not take anything for granted regrading work at this time.  Put in the extra time and effort; do not be lazy or dismissive.

In the most common tarot tradition, the major arcana tarot cards are seen as a story that unfolds when taken in order. This is called “The Fool’s Journey”, and starts with the fool tarot card, whose main character becomes the protagonist of this initiatory journey. The Fool represents us as we stand at the very beginning of a path (or even your life), with the kind of candor and innocence that can only be found when someone is unaware of the upcoming obstacles one will have to face.

It can represent someone just being born, someone starting a spiritual journey, or simply the start of a new project that takes one out of their comfort zone. Innocence and spontaneity are the main emotions found in their heart.

Meditating with the Fool

If you want to meditate using the Fool card as a focus, or if you have drawn the Fool as your daily card, try to find some new and exciting opportunities in your life. Follow your heart and take a leap of faith, even if you are standing next to a cliff because if you don’t you, will never know whether you were bound to fall … or to fly!

This usually steps one on a beautiful journey, so listen to what the Universe is telling you, and don’t hesitate to be bold! In the right context, this card can be a great source of motivation for you.  Trust in your tarot cards and prepare to be well rewarded.

The Fool’s Journey among the major arcana starts here, and the protagonist is still candid and innocent, unaware of what lies ahead. That innocence can be a strength or a weakness, and the key to deciphering this particular enigma lies within the other cards drawn next to it during a reading.