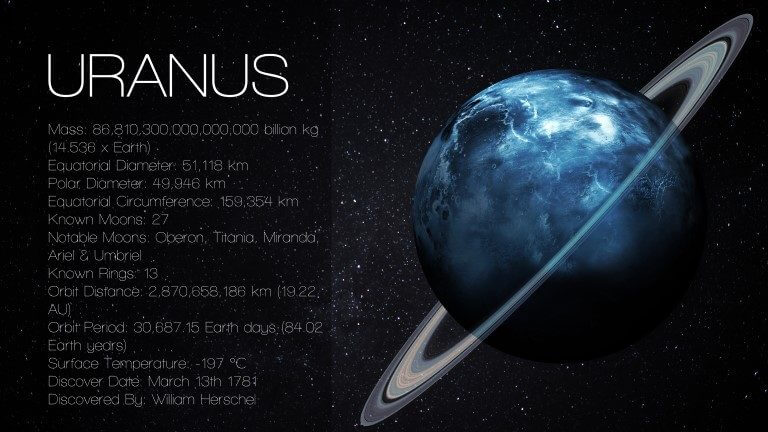 Uranus was the Roman God of the sky and Heavens. The planet is forward-looking and thus, does not like anything that is old or useless. The ruling planet Uranus is believed to be the higher octave of logical Mercury and is hence, very rational and objective. This explains why Uranus Zodiac is linked with a state of emotionless. The charts of the people showing great influence of Uranus are believed to the predecessor in their respective communities. While the planet Uranus also influences radical change, it maintains the altruistic characteristics of brotherhood, selfless and related humanitarian concerns.

The spectrum is so broad even to include environmental issues. Uranus Astrology shows it to rule over the Aquarius zodiac sign. Some people go so further to describe Uranus as ruling Astrology. The planet moves very slowly and remains in a sign for around seven years. This is to say that it takes about 84 years to cover all 12 zodiac signs. Moreover, in the list of transcendental planets, it is on top. It is important in our daily lives because it moves very slowly. This means that it not only influences individuals but entire generations, both existent and the ones to come.

Uranus is the seventh planet from the sun and while Mercury, Venus, Mars, Jupiter, and Saturn are easily visible, the planet Uranus was not discovered until 1971. It was seen before too but was always confused for not being a planet. Its planetary nature was discovered by Sir William Herschel, and before that, it was only seen as a star. The composition of Uranus is very much similar to Neptune having different bulk chemical composition relative to other planets.

This is why Uranus is frequently described as “ice giants.” While all other planets revolve around the sun, the ruling planet Uranus is found on its side. It is not very far away from the sun, but it continues to be the coldest planet.

Uranus orbits the Sun once after 84 years. Its atmosphere contains helium, hydrogen, ammonia, methane, Hydrogen sulfide and water. On the red end of the spectrum, light is absorbed by methane. This is the reason behind Uranus reflecting a blue-green tint. As more and more light is absorbed the shades becomes bluer and the atmosphere colder.

While Saturn is all flashy and Jupiter is all dramatic, Uranus remains to be the unique planet. It is referred to as “Uranus the bizarre.” The positive characteristics of Uranus are creativity, enhanced sixth sense, and brotherhood hence altruistic characteristics. Since supernatural study influences the planet Uranus, psychological capabilities are at its peak.

Since Uranus rules the Aquarius zodiac sign, it is largely concerned with encouraging leadership properties. The fact that people associated with this planet are not very emotional as they can end up being better leaders. Supporting the idea of radical change and bringing improvement also explains them being a good leader. Uranus is also responsible for bringing about the cool and calm side of the people.

While these people might or might not like to socialize, they know how to make things better. They might bring this improvement on a small or larger scale, but the improvement is sure to come. The negative characteristics of Uranus include emotional breakdown, phantasms, chaos, sexual perversion, unacceptable behavior, egoism, and selfishness.

What does Uranus mean in astrology is very important to obtain useful insights. Uranus rules uncertainty along with future, new technology, innovations, and anything that is to come, Uranus in astrology is also referred to as the father of electricity.  Since terms like inventions, unpredictable, creative and experimental are all linked with the ruling planet, Uranus also rules scientific genius and creativity.

When we talk about Uranus rules, it is more of a rule breaker and does not recognize existing structures. It is more an advocate of change.  Since it prefers radical change and works uniquely or suddenly, it is known as the Great Awakener.

In addition to this, Uranus in Astrology encourages independence and rebellion. Demanding change, liberty, and excitement, Uranus tends to move away from everything that is old and traditional or something that is no longer useful. Planet Uranus combines facts with intuition to discover universal reality. This explains why the planet is believed to yield fast results.

In Greek mythology, Uranus is described as the father of Titans. The planet Uranus largely signifies the power to bring about a change. It is recognized as a planet of evolution, radical ideas, and experiment. Uranus signifies greater spiritual ideas. It is believed to be a light that guides and awakens the society. The Uranus planet shows signs of extreme optimism. It rules over the Aquarius Zodiac sign, and its natural house is the eleventh house.

The symbol of Uranus is made up of a cross that signifies matter and the circle analogous to spirit. Having a semi-circle on both the sides represents openness and creativity. The Uranus Sign is the sign for Venus upside down. In short, Uranus symbol symbolizes art, science, creation, and change. It signifies originality yet something that is modern and up to date.

Uranus in Aquarius enhances altruistic characteristic. They are devoted to the cause of humanity and look for different ways to help people in need. This is what later accounts for their success. Moreover, Aquarius Uranus might be inconsistent, and that find it difficult to make loyal friends. Many other strong characteristics related to the zodiac of Aquarius are experienced. They demand change and the revolution following it might be violent or peaceful.

Having a very pleasant, calm personality, they attract people wherever they go and become easily popular. Their sixth sense is also very good, and they somehow know what is waiting for them in the long run. Being extremely creative and open-minded, they know how to overcome their problems. They also know the art of delivering their ideas to others.  Uranus horoscope hence, suggests that it is always good to have a lively Aquarius by your side.

While Uranus Aquarius likes to socialize, they are also detached and impersonal. They are strong-willed and like to keep their emotions and secrets to themselves only.  In general, Uranus Aquarius is seen to be very successful in life.

The personality of a Uranus Zodiac

The ruling planet is part of the outer planets that include Pluto, Neptune, Saturn, and Jupiter. Since the planet Uranus moves rather slowly, it has a larger impact on our lives. Hence, it won’t be wrong to say that its influence extends to generations. The terms “rebellion, eccentricity, reformation and unpredictability” are often used to describe the personality of a Uranus Zodiac.

The presence of Uranus in one’s natal chart describes a person as being eccentric, unique and sometimes weird too. When the presence of Uranus is very prominent, an individual would be viewed as difficult to tame and extremely wild. They would tend to be social, outgoing and adventurous. People can also sometimes become inventors and revolutionaries.

On the other hand, it can make some people remote too. Such people would prefer isolation over intimacy and are likely to be rude, extremely sensitive and will have a number of mood swings. This is the critical side of the Uranus planet. On the whole, Uranus demands a selfless attitude and a broad mindset to make the world a better place.

As per Astrology, Uranus rules or governs our higher minds. Much like Neptune and Pluto, the planet Uranus is concerned with unknown aspects of life. Being a forward-looking planet, Uranus motivates us to go beyond our vision and continue to look for change. Uranus is described as Father Sky in mythology who bore children with Gaia also known as Mother Earth. The planet that rules outer space tells us where we want to fly without any limitation. Keeping this in mind, there is no denial over the fact that parenting or fathering, in particular, came naturally to the ruling planet.

Moreover, the planet Uranus in your natal chart can show which responsibilities are worth fulfilling and where one must utilize his energies in the long run. Uranus is involved in shaping generations for it spends good seven years in every sign. Talking particularly Uranus Libra where Libra is largely into the institution of marriage may struggle with matrimonial responsibilities. This is evident from the fact that with the presence of Uranus in Libra from 1969-75, the divorce rate increased significantly. Similarly, Uranus Scorpio is very sexually driven.

The presence of Uranus in a specific house speaks much about the stages and aspects of a person’s life. Uranus is a liberator asking people not to form any restrictions or boundaries but live a free life. The role of the planet Uranus in one’s life is development, progression, and experimentation. It is Uranus that encourages an out of the box thought process. The position of Uranus tells people when they need to accept things as it is when they need to go against the norm. The modern generation as a result of Uranus has experienced increased levels of consciousness.

Their areas of interest have also somewhat changed with showing a particular interest in astrology and few other spiritual areas. In a nutshell, Uranus in almost every house encourages change and growth. How people achieve this might differ, but the idea remains the same. Moreover, while some are more confident and like to socialize others like isolation and prefer less talking and listening more to people. The majority of the people when associated with the planet Uranus tend to be in a state of emotionless.

Uranus rising individuals are advised to be very cautious when it comes to using electrical devices. This is because of the increased possibility of accidental electrocution or even being hit by lightning, depending on the position of Uranus. Hence, before you touch any electric appliance do look at where the planet Uranus is located. This might look silly to you now, but once you look into it yourself, you’ll be amazed.

While this is one view, the other more important one is that an individual may be more skillful or good at any task or activity involving electricity and technology. If this insight is significantly recognized, this may learn to the emergence of great geniuses. These geniuses, in turn, can come up with new innovations, which might actually make the life of their fellows easier.

Uranus, the ruler of Aquarius zodiac sign, is associated with transmitting electric energy and the promoter of radical change. Being forward-looking, it is extremely critical of things or aspects that are traditional, old, or of not much use. It demands to move from them toward something that this modern and useful. The planet Uranus symbolizes objectivity, constant improvement in the form of change, rationality, experimentation, and progression. Through radical change, Uranus planet is believed to bring peace, wisdom and moral in our lives.

While Uranus shows increasing trends of acceptance and socialization, trends, where people or aspects refuse to blend, are also very apparent. More or less the planet is about enlightenment and positivity. The negative aspects associated with the planet are that of rebelliousness without a sound reason or understand and lack of responsibility.

Moreover, there is no denial over Uranus being extremely intuitive.  It is Uranus as an intuition that triggers future research and investigation.  Those people who are ruled by Uranus are said to have greater leadership characteristics that can help bring the much-needed change.