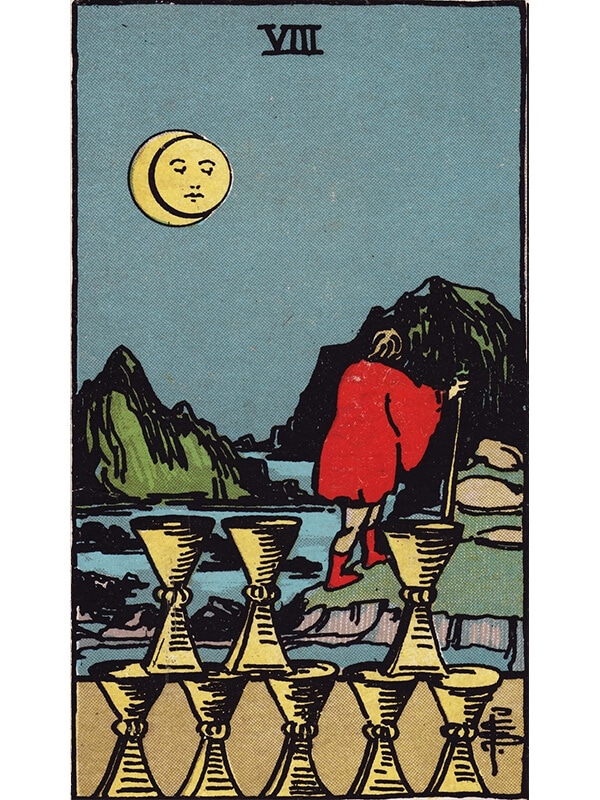 Reversed: resisting letting go, or conversely … running away, taking the easy way out, and shutting oneself out

The Eight of Cups offers yet another glimpse into the darkest recesses of human emotions. More specifically, it is a clear example of basic fight or flight responses when put under emotional duress and pain. Here the Querent must deal with rejection of some kind, and the temptation to just turn their back to the world and run away must be strong, but this is a slippery slope that ends with them withdrawn and alone in their own imaginary world.

As always for the most distressing arcana drawn during a reading, this should be seen as a dire warning to be heeded, using the tarot as a beacon shining a light of hope that might be useful in finding a way out, literally and figuratively.

The Eight of Cups illustration in the original Rider Waite Smith tarot deck is heavy with symbolism, with a heavier use of black lines and dark elements than in other arcana of that tarot deck.

The main protagonist of this minor arcana card only occupies a small part of the overall image, as he is seen walking away from the foreground using a walking stick on a path that almost seems painful. The eight cups are neatly displayed at the forefront of the image, three of them balanced on top of the other five.

The overall outlook is grim and gloomy, happening under the calm and watchful eye of the Moon in the night sky.

Like several other cards from the suit of cups, it is hard to define any kind of truly positive element in this minor arcana. This can easily be explained because as mentioned early on, the suit of cups represents the whole spectrum of human emotions, and there is usually a kind of balance between positive and negative feelings.

Here, the core meaning of the Eight of Cups card is overwhelming unhappiness and discontent. Just like the character moving away from the spotlight and into the shadows. The goal is to find a way out of a seemingly doomed situation, and therefore the character on the illustration has to leave.

When the Eight of Cups is drawn in a love tarot reading, is usually comes to highlight the negative consequences of a former love or affair that has turned sour. It might happen after a particularly rough breakup, or simply after having endured a kind of rejection coming from unrequited love.

Regardless, in that context, this minor arcana usually represents the kind of emotional pain and anguish felt by the spurned lover. This highlights a need for self-reconstruction, learning to handle and process that emotional pain in order to become functional again. It hurts, and it takes time, but it can and must be done.

Career encompasses school and education, if that is your current stage; work that is necessary, but not what you would consider a career path; and your actual career path.  Regardless of your current stage of development, the Eight of Cups lets you know that whatever the emotional investment, the value is no longer there and it is time to move on.

If you are a student and this is your card, then you may have to realize that you are on the wrong path regarding your studies and you need to move on from what you thought you wanted.  And, more profoundly, you may even realize that being in school is not for you and you need to leave academics entirely.

If you are doing work that is necessary, but not a career, then you probably know, on an emotional level, that the work no longer fulfills you in any way.  It is time to look for new work or go back to school for a new career.  There is nothing left in your emotional tank for the work you are currently doing.

The already negative meaning of the Eight of Cups is even further enhanced when it appears reversed in a reading. The raw unhappiness has become so strong that self-preservation overtakes any other reaction, and any pretense of leaving to find solutions to current problems is blown away by an almost primal need to leave, period.

Reversed, this card suggests holding on to a relationship well past the time the emotions for your partner left you.  You did build something meaningful (8 cups worth), but the value has long since passed and you have been going through the motions for far too long.

When this card appears reversed in a question about school, work, or career, then you know that you have been trapped in an unhappy situation for far too long.  While getting out will take great effort, you need to make a change to “save your soul” or be stuck in an emotional black hole regarding study, work, or career.