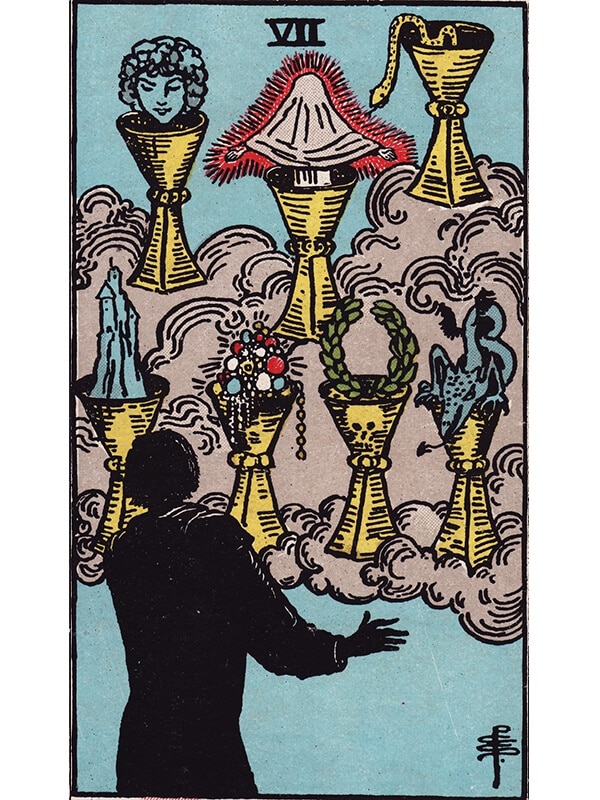 Reversed: confusion, indecision, being out of touch with the real world, and never-ending daydream

This is a rather unusual card in the suit of cups, channeling part of the fiery creativity usually found among the cards in the suit of wands. The raw and wild creativity is nonetheless filtered through the emotional prism of the suit of cups, for a result that is coherent with the overall message of the suit. Through the Seven of Cups, the Querent can access a whole new world of wonders and imagination but should remember to avoid the lure of constant daydreaming that can keep them away from truly experiencing their life.

This is yet another rather whimsical illustration that can be found in the Rider-Waite-Smith (RWS) Tarot deck. A silhouette is standing before seven chalices as if he had to make a choice. The core thematic is a mirror image of the four of cups scene where the protagonist also had to make a choice between several options.

The overall tone of the illustration of this minor arcana card is quite different here. While he turns his back to the reader, his lack of choice probably comes from a hard time deciding between several fantastic looking artifacts (jewels, a snake, a small dragon, and so on); whereas the man in the four of cups was clearly not interested in making a decision himself.

As a clear echo to the wild contents of the various chalices in the illustration, the Seven of Cups represents imagination and dreams. However, the inability to choose between several equally valid options might create a lot of confusion overall. This creative effort nonetheless differs from the one that could be found in various arcana from the suit of cups, of a more fiery and driven nature and temper.  The source of creativity in the Seven of Cups is more connected to primal emotions and feelings, something slower and less flashy, but usually gifted with more depth.

While the Seven of Cups is a nuanced card in and of itself, when it is drawn in a love tarot reading the specific energies and meaning of the card are usually detrimental to a healthy and fulfilling relationship. Indeed, even if there is a chance for something to happen, the Seven of Cups might trap the Querent within his own aspirations and dreams.

Projecting himself into an idealized version of a future together, he or she might never open their heart to the one they love for fear of rejection, remaining content with a kind of “what if?” that might never get solved. The only way out would be to recognize this flaw and fear of commitment for what it is and use willpower to push through the last shreds of doubt. While the outcome of a relationship is never certain, even rejection is better than endlessly pining for a connection with someone that might never come to be.

Career encompasses school and education, if that is your current stage; work that is necessary, but not what you would consider a career path; and your actual career path.  Regardless of your current stage of development, the Seven of Cups shows up to have you review your motivations for what you study, the work you do, and the career you have chosen.

If you are a student and this is your card, then how do you feel about your choices so far and the ones you are trying to make for your future.  Each cup represents different dreams and motivations. Which choice will you make and why?

If you are doing work that is necessary, but not a career, then you may realize that you do not have as many choices as you once had.  Or, perhaps your motivations and dreams need to change for you to work happily.  Or, maybe you need to make a different choice regarding work.

If you are in your career, then the Seven of Cups encourages you to realize it is time to make an important choice regarding the direction of your career.  What motivated you when you started may still motivate you, or you may be feeling the need for new motivation.  If you need a new energy driving you, what will it be?

The meaning of a reversed Seven of Cups in a reading highlights the very unlikely nature of what the figure in the illustration seems to be reaching out for. Relying too much on imagination and dreams might be a way to lose touch with reality, or become excessively withdrawn in order to escape everyday life. Pushed to the extreme, it might lead to an absurd situation where any concrete decision would be carefully avoided, only to have you relive these moments in your mind, playing out the different variations of what might have been.

Reversed, this card suggests some illusion or delusion regarding relationship.  Time to take of the rose-tinted glasses and see what is “really” real, rather than the illusion you have accepted and supported.  Perhaps the break from the distortion will allow you to reconnect more deeply; or you, in seeing things for what they really are, realize it is time to move on.

When this card appears reversed in a question about school, work, or career, then you know that your current choices are leading you astray; you are deluding yourself about where your academic studies, daily work, and career path are taking you.  But you are deep into the delusion, which means much more work will be necessary to make a change.