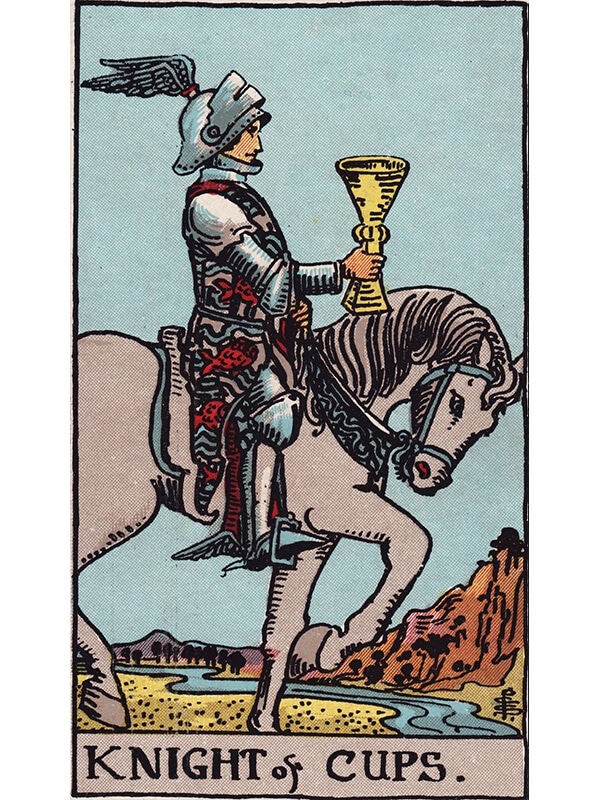 Upright: a romantic, an artist, and a dreamer with his feet on the ground

Reversed: moody, out of touch, jealousy, and possessiveness

The active element of the four court cards in the suit of cups, the Knight of Cups is a fiercely loyal dreamer that moves gracefully and can easily become the center of attention. The element of water fills him with emotions and feelings that he will turn into art, or into energy that will motivate him to perform or do something.

Utterly devoted to his love, family, and friends, he will take any betrayal personally and will be extremely wary to renew his trust to someone that ever turned their back on him, even if it happened years ago. Jealous in love but faithful to the core, they want their life to end as well as the princesses and princess of fairy tales, happily ever after.

The Knight of Cups in the Rider Waite Smith tarot deck is an adult man in heavy armor with a winged or feathered helmet, holding a cup in his right hand. He is riding from the left to the right.

He is riding on a field and a stream or river is flowing. There are mountains and hills on the horizon.

The armor worn by the Knight of Cups seems to be ceremonial rather than warlike, and his horse echoes that impression by walking very gracefully, lifting its hooves like a horse in a dressage competition for equestrian sports.

Like the Page before him from the suit of cups, the Knight of Cups is a dreamer at heart. But age and experience have shaped him into a more active agent of these dreams. As such, the Knight of Cups usually represents a fully-grown artist, turning emotions and feelings into poetry or song.

In stark contrast to the fleeting aspect of the Page, the Knight of Cups of the minor arcana is loyal to his core and will stand by his love, family, friends, and beliefs (usually in that order) in times of need.

The Knight of Cups is a young adult that is easily approached and befriended. Contrary to the Page of Cups, he is an extremely loyal person, and will readily speak of commitment and dedication. He is all too happy to play the part of the knight in shining armor, which he is.

In love, they try their best to appear like the ideal lover or husband, though they usually try to hide their flaws rather than to really work on them to try to remove them. The extremes of loyalty that the Knight of Cups is capable of can also lend him a rather jealous character and will have a hard time to forgive any breach of trust or confidence.

If you are a student and this is your card, then you need to find your passion and pursue it.  There are multiple Grail quests for the right classes and the right degree and the best instructors.  Feelings guide the energy of your quest.

If you are doing work that is necessary, but not a career, then you do want to make sure your “adventure” in work is taking you to where you want to go financially and in terms of living your daily life and taking care of your expenses.  Work needs to satisfy you emotionally.  If it does not, then it is time to quest for a new job.

If you are in your career, then the Knight of Cups represents the next passion you need to develop or pursue in your line of work.  You want to be excited and intense to go further and deeper into your specialty.

A particularly striking downside in the character of the Knight of Cups is that while he will much more readily listen to reason than the Page of Cups would, he will nonetheless still stand by the tenets of his heart and follow them to the very end, even when he knows that he is in the wrong. He would rather ultimately be wrong than betray his own principles.

This obvious contradiction can make him quite moody and irritable until the situation is ultimately resolved, one way or another. He will usually blame himself if the situation turns sour but will stand by any decision he made; and even knowing that the outcome will be bad, he would do it all over again.

Reversed, this card indicates that your emotional goals are blocked.  In fact, your emotions might even be your obstacle.  This card can also indicate that your relationship has lost its sizzle and you could start looking for love in all the wrong (reversed) places!

When this card appears reversed in a question about school, work, or career, then you need to be aware that you may be burned out emotionally.  There is no gas left in the tank for work right now.  A break or hiatus is in order, and you should find a way to take one.  You will not be much good, workwise, at this time.