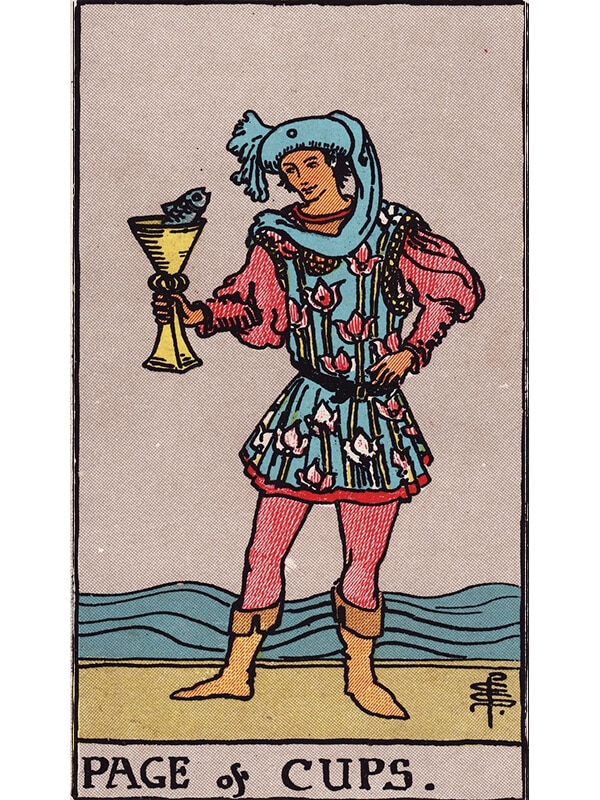 The youngest of the four court cards in the suit of Cups, the Page of Cups is the incarnation of the water of dreams and emotions as it starts flowing into the world. As such, they are very charismatic, though they usually stay quiet until the crowd fades away and there are fewer people around. They represent the aspect of youth that would rather live in their own minds and dreams because the outside world is too bleak and cold for their emotional warmth.

The Page of Cups in the Rider Waite Smith tarot deck is a pretty and almost androgynous young adult man holding a cup or chalice in his right hand. A fish resides in that cup and rears its head up to look at the young man.

In this card from the suit of cups, he is standing on a shore (hard to tell if it is meant to be a river or the sea) and we can see water flowing behind him. In colored versions of the RWS deck, his main tunic and hat are deep blue like water in traditional imagery.

In his book, Waite described the young man from the minor arcana, as being effeminate, and the picture itself is rather ambiguously androgynous. Regardless, several modern tarot decks and variations around the rider deck have turned the Page of Cups (and all the other pages) into females, to restore a kind of balance and parity to the court cards

The fish coming out of the chalice held by the Page of Cups is clearly meant to seem unlikely and implausible when you notice it. As such, it represents the intrusion of dreams into the real world under the impulse of the Page. Dreams are usually the most abstract and raw way to express emotions; and therefore, they are usually connected to the Page of Cups in the tarot.

By filtering these dreams into the real world, the Page of Cups also represents the inspiration of artists and poets, turning emotional messages into art, while keeping a curious and open mind in order to absorb new ideas and concepts that will then create new dreams in a never-ending cycle.

The Page of Cups is often very beautiful, and they know it. As such, they can be extremely sensual and seductive in love, but will easily shy away from any sort of commitment.

They will, however, readily share their feelings and open up their heart. They might not be ready to “put a ring on it”, but at least they will usually be honest and upfront about it.

The Page of Cups is a good candidate for the Querent card if he or she embodies the beautiful dreamer archetype, an introvert in a large social group that will more readily open up when alone with someone else.

Career encompasses school and education if that is your current stage; work that is necessary, but not what you would consider a career path; and your actual career path.  Regardless of your current stage of development, the Page of Cups lets you know that you have a dream, but not enough focus yet.

If you are a student and this is your card, then you may be “undecided” about your course of study, and that’s okay.  You may need to explore different interests until you settle on something that really grabs you.  It could even mean you should delay schooling until you are clear about what you want to study.

If you are doing work that is necessary, but not a career, then you are probably just going with the flow, neither really for or against what you are doing.  You can just keep flowing until you do feel clear; no need to force anything right now.

If you are in your career, then the Page of Cups could represent new energy for imagination and openness to a different dream.  You might be ready to return or go forward into a phase of the unknown, just so you can see how to problem-solve your way through.

One of the downsides of the Page of Cups is that someone that constantly lives in a daydream, or channels raw emotions without any desire to filter them or tone them down, can easily be considered emotionally immature.

Also, the way they trust their own feelings and dreams more than reason or common sense can make them stubborn in their refusal to admit clearly defined arguments, even with tangible proof.

Reversed, this card indicates that your dreams and desires are out of alignment with reality; in essence, you need a reality check about your relationship.  You are not grounded and you may even feel you are being led astray by your emotions.

When this card appears reversed in a question about school, work, or career, then you need to be very careful regarding commitments and contracts.  Energy is unclear and potentially manipulative.  If you do need to make a decision, slowly go through the process, and get some input from people around you who you trust.