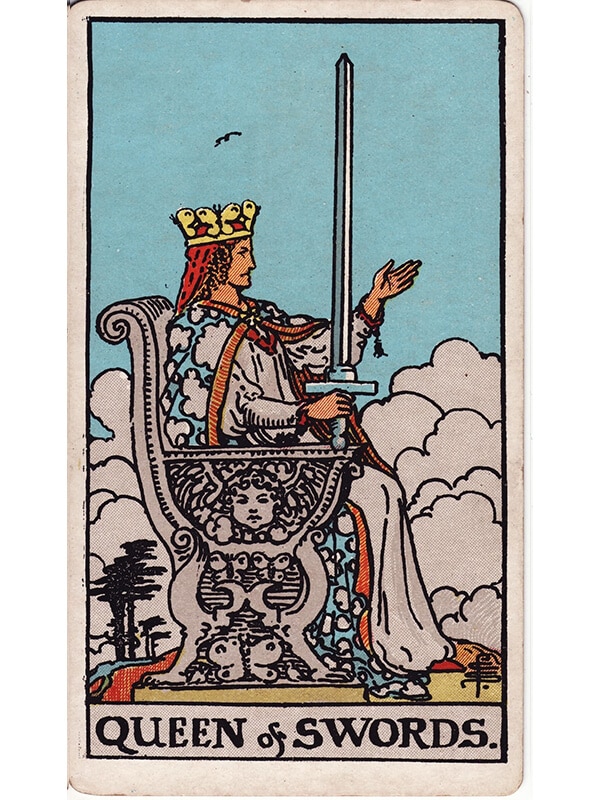 As a reminder, the suit of swords is driven by masculine energy and channels the power of the intellect and mind, including all the concepts, knowledge, and beliefs that it holds. Scholars and academics have connected the suit of swords to the classical element of air, and most of the cards from that suit embody the symbolic attributes of this element, one way or another.

The soul of the four court cards in the suit of swords, the Queen of Swords is an intelligent and sharp individual, in a position of power and authority. She can feel emotions but usually lets her mind process them before she acts on them.

This double-check can make her appear severe or cold-hearted, but it is just a way to make sure that there will not be any leak or that her plans will not be jeopardized by a sudden burst of emotional foolishness.

The Queen of Swords in the Rider-Waite Smith tarot deck is sitting on her royal throne, seen in profile, looking to the right side. In her right hand, she holds a sword that is a symbol of her suit. Her left hand is extended, palm up. There are a lot of clouds behind her, highlighting her connection with the element of Air (Aquarius sun sign).

When looking at her face, it can appear as if she is acting stern or severe. This is not a frail and unassuming member of the court; she is in a position of leadership and wants to make the most of it. She has the sharp intellect associated with the suit of Swords and she knows how to use it

As the soul of the suit of swords in the minor arcana, the Queen of Swords embodies the use of intellect and wit, as encouraged by the essence of the element of Air. Fiercely independent, she is her own woman and will let no one make her decisions for her, not even the King. She knows that the world is not fair to women, so in order to be considered equal, she must be better.

To that end, she makes the most of her brain and has become an extremely effective problem solver, planning anything ahead of time and keeping a close eye on anything relevant, even when she cannot be physically present.

To avoid making any mistake, she lets her mind pilot her every decision, processing emotional responses through logic and dissociation so that it does not affect her judgment one way or another.

The Queen of Swords is a sharp-witted and efficient young woman, who refuses to limit herself to the position of a companion or be defined by the men around her instead of her own accomplishments.

As such, the Queen of Swords is a rather difficult card to encounter in a love-based tarot spread or reading. It is a woman who will not readily offer her trust, and always have a line of contingencies in case anything might turn bad for her. She would rather stand alone than compromise her position or anything she has fought long and hard for.

Career encompasses school and education if that is your current stage; work that is necessary, but not what you would consider a career path; and your actual career path.  Regardless of your current stage of development, the Queen of Swords is about mapping out your strategy and planning your moves several steps in advance.

If you are a student, then drawing this card indicates that you need to look at your entire academic career from beginning to end and map out your overall course of study to achieve your degree.  Even if you do not complete the path exactly as planned, you want to see the whole process and tweak it accordingly.

If you are doing work that is necessary, but not a career, then you want to envision where you are until you get to retirement, and then beyond.  Even if you are “just working”, you want to take time each year to look at what you have accomplished, where you are presently, and where you are trying to get to, with your work and finances.

If you are in your career, and the Queen of Swords appears in a reading, then you need to look at or make your yearly projections, to see what you want to achieve in five, then ten years.  Each year you want to assess you progress.  This card could also indicate it is a good time to hire a consultant or consulting firm to assess the strength and weaknesses of your company.

When the Queen of Swords appears reversed in a reading, her decision to focus on her intellect rather than on her emotions can be pushed to the extreme and make her so blasé about human pain and suffering that she appears rather cold-hearted to an outside observer.

When a reversed Queen of Swords appears in close vicinity to one or more cards from the suit of Cups, it might conversely show that her plans to let logic dictate matters of the heart have failed, and that she is currently overwhelmed by her emotions.

Reversed, this card indicates that you need to reassess your strategy regarding your relationship.  You and your partner may be at cross purposes regarding your plans.  Maybe one of you wants to have a child and the other does not, or you both want a child, but you do not share the same timetable.  Some aspect of your relationship and your goals needs reassessment.

When this card appears reversed in a question about school, work, or career, then you need to reassess your path and goals. You may need to make some minor or significant adjustments, because this card, when reversed, indicates that the plan is not right or unfolding accordingly.  If you ignore the warning, you do so at your peril.