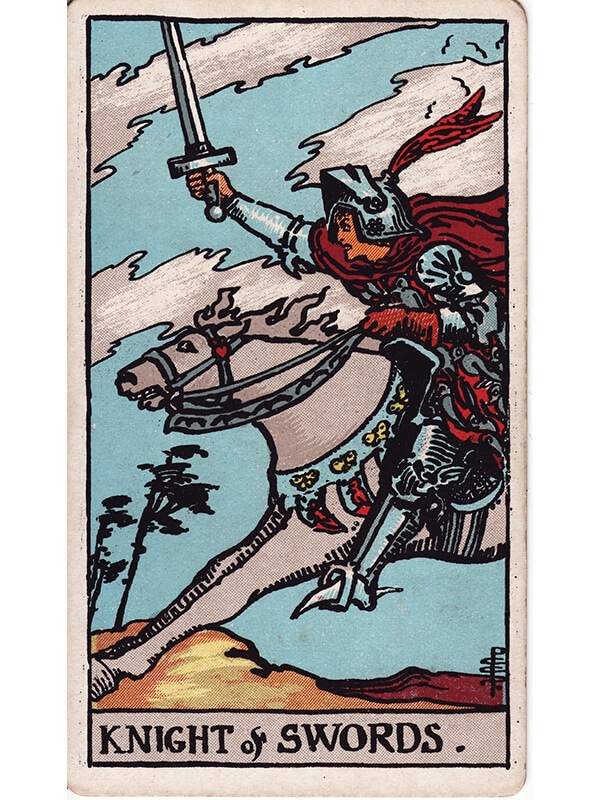 As a reminder, the suit of swords is driven by masculine energy and channels the power of the intellect and mind, including all the concepts, knowledge, and beliefs that it holds. Scholars and academics have connected the suit of swords to the classical element of air, and most of the cards from that suit embody the symbolic attributes of this element, one way or another.

The Knight of Swords looks like the archetypal knight in the Rider-Waite Smith Tarot deck illustration. A young man in full battle armor is charging ahead on a white horse, sword drawn and ready to be used. This cavalry charge scene would not seem out of place in Lord of the Rings, Game of Thrones, or all the recent entertainment successes in the Fantasy genre.

More than any other card in the tarot deck and in the suit of Swords, even with the other knights, the Knight of Swords looks like a larger than life hero. In his Pictorial Key to the Tarot, A. E. Waite compared the Knight of Swords to Galahad from the roundtable, with a swift sword and a pure heart.

The Knight of Swords is ultimately an over-achiever. Bold and proactive, he uses the power of his mind to choose his battles and bring forth action and change. In a way, this Knight is always on some sort of quest or another, always striving for a greater goal.

Also attached to the Air element (Gemini star sign), the Knight of Swords represents someone that is highly skilled but also has the courage and will to use it. He is highly intelligent and motivated, ready to answer any call to action.

The final important element to remember when the Knight of Swords appears upright in a tarot reading is that as the embodiment of the proactive aspect of the mind and will, he represents someone with strongly anchored ideas, and his readiness to act consequently makes him an activist. The Knight of Swords can usually represent the most passionate people you can find at either end of an ideological debate.

The Knight of Swords is a bold and colorful young adult, very charismatic and larger than life. He or she is extremely skilled and knows it, even if these skills are not always put to the best use. Like a knight in shining armor, they move with such presence that it is rather easy to fall in love with them.

Like many heroes of old, however, while they are capable of love, it will always be a secondary concern to them, focused as they are on their desire to change the world and uphold their own values.

Career encompasses school and education if that is your current stage; work that is necessary, but not what you would consider a career path; and your actual career path.  Regardless of your current stage of development, the Knight of Swords represents the single-minded focus on your goal.

If you are a student, then drawing this card indicates that you need to have and use absolute clarity about what you want to achieve academically.  You want to use your focus to ensure the outcome you want.  Let no doubts or confusion enter your thoughts.

If you are doing work that is necessary, but not a career, then you want to think about your next goal or task at work with clear-mindedness and the focus necessary to make you a great employee.  Tune everything out that would be a distraction that would interfere with you getting an important or needed task done at this time.

If you are in your career, and the Knight of Swords appears in a reading, then you need to select your next direction with your career and focus your mind to get started, work through, and achieve the outcome you know is best.  You want to complete a task or implement a new idea and see it completed from start to finish.

The intense sense of self-righteousness that can be found in the Knight of Swords can sometimes lead to extreme behavior. A reversed Knight of Swords in a reading tends to highlight this very Machiavellian view, dividing the world into black and white, day and night, right or wrong, without any room for shades of gray in the spectrum between these extremes.

Convinced of being right, and that the universe is on his side, the Knight of Swords can act with imprudence and hastiness, without taking much time to plan ahead or think about the negative consequences that might come from his actions, especially collateral damage. He is so focused on his quest that anything he does to see it through will be aimed at his final goal, oblivious to anything that happens around him.

Reversed, this card indicates that you are “cutting your nose off in spite of your face” by holding onto an argument in such a way that, even if you are right, you are doing harm to your relationship emotionally.  Being arrogant or self-righteous about an issue or communication in the relationship is causing or will cause unnecessary harm.

When this card appears reversed in a question about school, work, or career, then you need to be careful about arguing with your instructor, boss, or an important client.  You could be in the wrong and should listen to the person with more knowledge or experience.  Or, you could be right, but if you embarrass someone more powerful than you, it could go badly for you.