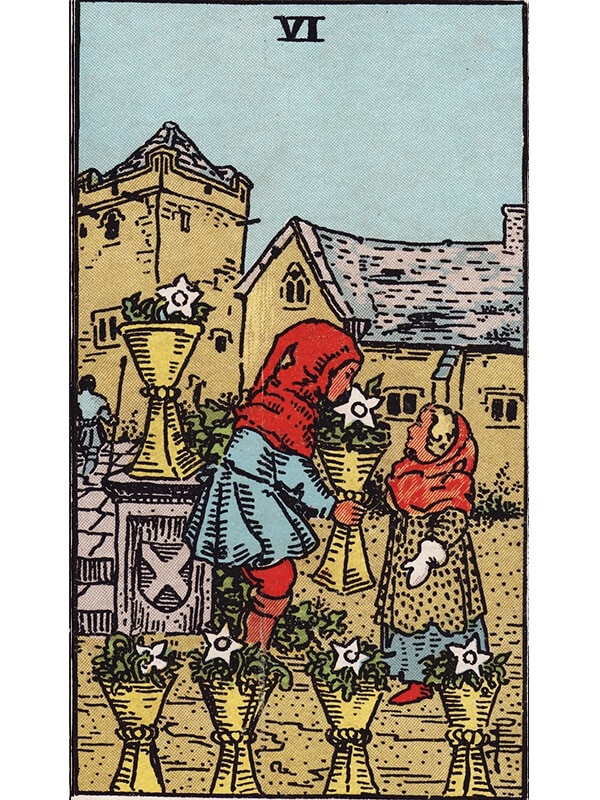 Reversed: living in the past, apathy, lack of motivation, and out of touch with the real world

While a clear aftertaste of nostalgia and melancholy can linger around this card, the Six of Cups embodies a return to a simpler time when love and emotions were much easier to process and did not hurt nearly as much. These happy memories can act as a reference guide, a beacon providing a kind of long-term goal and something to look forward to.

But these fond memories should not become an excuse to stay away from everyday life and neglect basic survival routine by shutting oneself away from the rest of the world. It should be used to provide further meanings and incentives to live life to the fullest, and not simply to daydream about an irresistible Utopia that would stay forever out of reach.

A boy and a girl are usually depicted on the Six of Cups minor arcana, and in most versions of tarot deck illustrations, they are both very young, probably under ten. They are standing next to a series of cups and chalices that have been refilled with flowers instead of any liquid. The boy and girl are facing one another and seem to be halfway through a conversation that catches their full attention.

The emotions conveyed by the suit of Cups are now deeply tainted with nostalgia but in a good way. Through basic daydreaming, the Querent can get reconnected with their inner child, channeling its essence in order to restore the candid innocence that used to be theirs.

Just like the two young children in the illustration, the Querent can experience the joy of simple pleasures and boundless affection, doing something for someone without feeling the need to receive anything in return.

Finally, this minor arcana also represents memories coming back to the surface … visions, and images of your past taking shape before you.

There are two possible interpretations when the Six of Cups is drawn for a love tarot reading. The first simply suggests that the Querent is constantly or almost constantly lost in their own memories, trying to reproduce a much simpler time where love and relationships were not so hard to keep up. This is not necessarily a bad thing when done with moderation, and could provide a much-needed change of pace in a relationship that might have otherwise fallen apart.

The second interpretation might be a desire to channel the innocence and youth of the boy and girl on the illustration by making a child of their own. This interpretation becomes even more likely when this minor arcana is combined with other thematic arcana for nature or motherhood like the Empress or the World. In that case, this is clearly something that should be discussed more seriously with their significant other.

Career encompasses school and education, if that is your current stage; work that is necessary, but not what you would consider a career path; and your actual career path.  Regardless of your current stage of development, the Six of Cups is about the good feelings you have with happy relationships in school, at your job, or in your career.

If you are a student and this is your card, then you should identify your closest friendship and your happiest memories around school and your education.  You may have lost touch with someone and it could be a good time to reconnect.

If you are doing work that is necessary, but not a career, then you want to appreciate the close friendships you have or have had at your job.  Maybe there is someone in particular you really enjoy working with and need to appreciate the friendship more or give it more attention right now.

If you are in your career, then the Six of Cups shows up to get you to think about all the people you have helped, especially those who gave back to you as much in return as you gave them.  Long-term success in a career is often built on positive and healthy relationships as much as skill and hard work.

Fond memories and daydreaming can turn into a gilded cage if they are not kept in check. When you have to face an extremely stressful everyday life, it might be tempting to turn your back on all your duties and responsibilities to simply close your eyes and experience your story and memories again.

This can work, for a while, but might create a feeling of nostalgia that will be very hard to escape. As such, the presence of a reversed Six of Cups in a reading should be read as a word of warning against spending too much time in the past through the dark recesses of your mind.

Reversed, this card suggests you are relying too much on past success in the relationship to be a mitigating factor for current problems.  You use the “honeymoon” memories to suppress new realities that suggest the relationship needs hard work or is failing.

In a professional context, a reversed Six of Cups would indicate relationships that were once healthy and helpful are now deteriorating.  Perhaps they can be saved or perhaps not, but either way, the card reversed indicates some trouble that could affect your work.