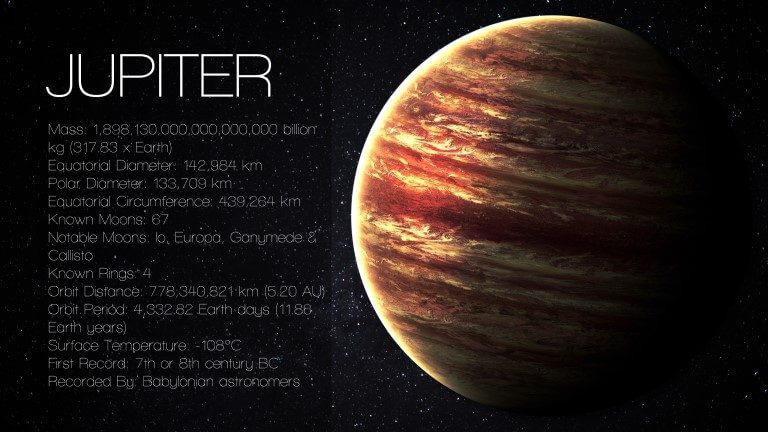 Jupiter in astrology holds a lot of significance, as it is considered to be the planet of plenty is both expansive and tolerate. It is a planet that has a broader reach, possibility, and purpose. The planet Jupiter has generally been associated with bounty and good luck. It also acquires the ability to be optimistic and growth (which includes both spiritual and mental growth). On top of this, Jupiter in astrology is also related with goodwill, mercy and a sense of humor. However, the negative illustrations that are showed by Jupiter consist of overindulgence, excess as well as blind optimism which can dominate one’s personality.

According to the charts, the position of Jupiter sign reveals the way how we show tolerance and generosity not only towards people but also according to the situations. This element of trusting people blindly indicates how we improve our lives by trusting others. The Symbol of Jupiter shows the crescent of acceptance and open-mindedness that is rising above the cross of matter.  This, however, perfectly symbolizes the role of Jupiter as a planet of increasing our awareness which is increased beyond the physical world. Jupiter also motivates us to reach, improve and expand in life.

What does Jupiter mean?

The planet Jupiter is widely known to be as the thinking person’s planet. Whereas, the literal Jupiter meaning emerges from the Romans, as according to Roman methodology Jupiter was considered to be the Supreme God who was responsible for protecting laws of the Roman state as well as he presided over light and heaven.  Jupiter being the guardian as that of an abstract mind, this particular planet exercises ultimate power over higher learning and grants us with the urge to explore ideas, spiritually as well as intellectually.

When talking about intellectually, this particular planet Jupiter helps us in developing our ideology. However, Jupiter lords over philosophy and religion, in the spiritual realm. The common man is in search of an answer to the question that what is proposed by the planet Jupiter in astrology, and if this means that you have to go around the globe searching for its answer, well, then to no surprise this is also the reason why Jupiter rules long distance traveling as well. Apart from this Jupiter also tends to compel us to assess our moral and ethical values, as this also addresses the sense of optimism that we have.

More about the planet Jupiter

Jupiter the ruling planet, is also known as the king of the planets. For a good reason, good fortune and good luck are also associated with the planet Jupiter. This is considered to be a benevolent and a kind planet. Jupiter is a planet which creates every possible situation for us to flourish and grow positively. Jupiter might serve as the judge and jury, but this mostly acts as an honorable helpmate, as it sees that we are headed towards the right path whereas, our accomplishments, success, and prosperity that we achieve in life are all in Jupiter’s realm.

This, however, can sometimes result in making you lazy and sloth. Jupiter will always guide us all the way down the primrose path. Leisure time is considered to be as Jupiter’s pastimes. The characteristics that are ruled by this planet are that people are active and play all kind of sports and they hold immense love for the animals. On average it takes the planet Jupiter approximately 12 years to circle the zodiac (the planet that visits one sign in a year). Jupiter in astrology shows masculine energy and is the planet that rules both Pisces zodiac sign and Sagittarius zodiac sign as well as the ninth and the twelfth house respectively.

In the entire solar system, the planet Jupiter is the most massive and the largest planet that exists which is made up of mostly helium and hydrogen gas. This particular planet is so big that it rotates around the sun at a point that is set outside of it. Because Jupiter spins very fast, that takes less than ten hours to complete its one rotation, so its day is experienced to be extremely short.

Also, because Jupiter possesses a strong gravity field, it is often referred to as the protector of the world as we all know it. This Jupiter characteristic, however, enables it to turn space debris and meteors off course and attract these bodies to the Jupiter’s surface so that it prevents them from reaching the surface of the earth and cause any destruction. The colorful clouds that are present on the surface of Jupiter are not very thick, as these colorful clouds are made out of ammonia crystals.

The planet Jupiter represents the last boundary along with the planet Saturn that can be viewed by the naked eye. Jupiter is the largest of all the planets that are present in the solar system which has a diameter of about 11 times as that of the earth and is made up of a combination of helium and hydrogen gas. Because of this reason, Jupiter is more often referred to as the gas giants.

What does Jupiter represent in Astrology?

In many astrological interpretations, the planet Jupiter in astrology is mostly idealized which might not appear to be strange when we take into consideration the Jupiter’s role in the chart. Because of the beneficent nature that this particular planet has, it provides us with hope, and it is without any doubt that we would desire to view it through pink goggles while expecting all the great things that it will bring to us in our lives.

According to the Jupiter astrology, we have to remember that no particular progression, direction or any transit will result in bringing about any incredible favorable circumstances from happening, until and unless they are entirely supported by the event of possibilities that appear to us after viewing the natal chart of that particular person.

So, Jupiter in astrology might bring events like eternal love or marriage into your life if it currently moves through your seventh house. But this will only happen if there is enough potential that is seen in your natal charts where it is likely to happen. But if there is no evident connection that exists between both, the seventh house and Jupiter, then there are fewer chances of any these incredible events from actually occurring in your life.

According to Jupiter astrology, each natal chart comprises of a width and point protection which is presented by Jupiter’s position. As the only thing that we decide is to learn this makes it is our teacher, along with the convictions and the systems of belief with the help of which our reality is defined. If this is set in Gemini or a Capricorn, we can suppose that either these convictions don’t make possible progress because they are too stiff, or they are kept on the mental plain by the person, who is not very well aware of the different ways to look for a connection with material reality.

Every problem that is associated with the planet Jupiter will lead us to the problems that exist with vision, imagery, a sense of purpose as well as our imagination. The greatest challenge that can be brought to you by the planet Jupiter is that it brings a complete lack of purpose and meaning in the life of a person.

Jupiter Symbol and what does it mean

The Jupiter sign which has been given to the planet Jupiter appears more to be an oddly shaped “four” the number that stands for many symbols. It is said quite often that this symbol represents an eagle, which is assigned as the bird of Jupiter. Also, this particular symbol can be represented as the letter “Z” that is the first letter with which Zeus begins, who is considered to be the Greek counterpart of Jupiter. However, the Jupiter sign meaning shows that this sign is a symbol of increasing awareness, which also motivates them to expand, improve and reach.

The personality of a Jupiter zodiac

Jupiter is believed to express tolerance and generosity in people. The planet largely impacts the people as it helps them to stay calm and also gives them the strength which they are in need of to cope up with the difficulties that might come their way. This planet also influences a person’s not only spiritual growth but also intellectual growth by helping them and to giving them the power to maintain optimism.

Those people who are under the influence of Jupiter tend to set high goals in life with the passion for pursuing them in any circumstances until they are achieved. This, however, also makes us passionate to do bigger things that we do on a daily basis to make money and take care of all our materialist needs.

However, Jupiter in astrology encourages curiosity among people on a wide scale due to which people feel more passionate in order to pursue their goals and to achieve them. This planet also plays a vital role in defining our guiding principles and always encourages us to move in the direction that will be leading you to success. Jupiter can also inspire us at times to be risky and take risky decisions in life, as this might be the only way out for us in order to lead us to our dreams and turn these dreams into reality.

One of the best things about Jupiter is that it brings happiness in the lives of the people under its rule that is said that Jupiter helps people where they feel the sense of responsibility for their actions and things that they do in their life and also it attracts just the noble things. Jupiter is also seen to influence our image significantly.

This particular characteristic results in making people more confident particularly in expressions. You can always count on the guidance that is provided by the planet Jupiter in case if you feel the need to state your point and also to prove that the point that you have made is right.

One of the strongest sides of this particular planet is knowledge. Those people who are led by Jupiter tend to examine everything carefully and a deeper look into everything. To stand out and to be the best among the rest, these people are in a constant struggle of improving their abilities and skills. Such people know the real value of generosity and knowledge as these two features turn out to be the most significant feature that shapes the personality of each person.  When the personality of a person is influenced by the planet Jupiter the main goal of these people is self-improvement and self-realization.

Jupiter in astrology will always be the planet which will be recognized as a noble attitude, moral and wisdom in our lives. It is our responsibility to give in your best from the believe and heart in the best possible philosophy of our life, fortune, and optimism. Jupiter is no less than a tool that exists which can be used to widen our perspectives with which we look at things, but it also increases our consciousness through movement, adventure, acceptance, satisfaction, and most importantly knowledge. Those people who are ruled by Jupiter are told that they will always have a bigger picture in sight with big goals that they desire to achieve in life.