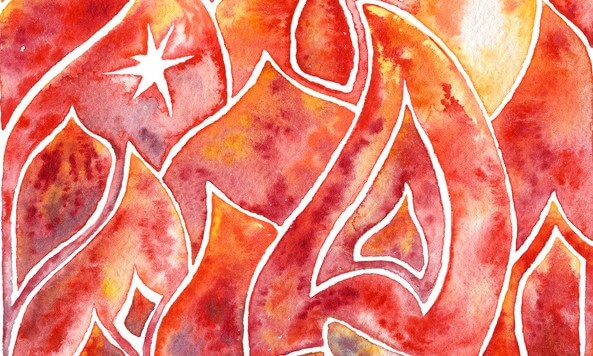 The Four elements in Astrology, Fire, Water, Earth and Air, along with their Zodiac signs, are integral to mankind’s millennial search to give meaning to their existence. The Astrology information garnered from mankind’s observation of the stars, lunar cycles, change of seasons and 4 elements of Air, Water, Earth and Fire, led to the evolution of Astrology as a science. Even before the element of fire itself was invented, early man looked to the Sun to give the fire element meaning. The Sun, one of the fire element symbols, is considered to be the purest fire symbol.

Associated with the element of fire and most of the traits traditionally connected to this element can be found in Tarot (the suit of wands) too.

The Element of Fire and the Zodiac

The Zodiac encompasses 12 constellations that run along an imaginary path known as an ecliptic. The Zodiac signs are grouped in threes known as triplicities, in accordance with to their position on the ecliptic, which is exactly 120° apart from one another. An individual’s Zodiac sign and Element are determined by the date of their birth. Zodiac signs change around the 21st of each month. The Four Elements of Astrology, Fire, Water, Air and Earth, are assigned to a Zodiac sign by the season in which their Zodiac dates fall. Modern day astrologers rely on the triplicities of the Zodiac signs and their elements in plotting astrological charts. Taking into consideration the threefold nature of the Zodiac signs and their elements, what are the three fire signs of the Zodiac?

The fire signs of the Zodiac are: Aries, Leo and Sagittarius. As the element fire meaning connotes the aspects of fire itself, Fire Element personality traits encompass an intense fiery nature that evidences itself in passionate pursuits and beliefs, as well as in radiated light being shone upon others or upon intellectual enlightenment. People are drawn to the fiery intensity of Fire Element personalities. However, as with fire itself, there is a combustible factor to the fire signs in their ability to send out sparks that can harmful when their intensity generates a heated imbalance with their surroundings.

The Element of Fire and Planetary Rulers

Each of the 12 Zodiac signs are “ruled” by a Planetary House of the Zodiac. These “Houses” represent specific personality traits that “rule” their Zodiac assignment. The Houses are numbered from 1-12; numbers 1-6 are labelled as the Personal Houses and numbers 7-12 are labelled as the Interpersonal Houses. As a study of each of these Houses will reveal, their labelling becomes self-evident. The Houses of the Fire Zodiac signs are the First, Fifth and Ninth. All of the Fire Element Planetary Rulers are located within the Personal Ruling Houses of the Zodiac. This is a strong indication that the Fire Element personality traits are directed toward the self, rather than others.

The Element of Fire and Seasonal Impacts

The Four Elements in Astrology evolved through mankind’s observations of the simplistic nature of the seasons; hot, wet, dry, cold. As for the Fire Element triplicity of Aries, Leo and Sagittarius, they were all associated with the season of Summer, Summer being hot becoming dry. As a result, Aries, Leo and Sagittarius were all assigned to the Element of Fire. One could easily wonder how this could be possible since the element fire triplicity spans the seasons of Spring into the Autumn.

In developing the 4 Elements in Astrology, the transitioning factor of the Season’s was taken into account. It is within this transitioning nature of the seasons that differentiates the Elements of Fire. At their very core, fire signs are hot and dry. Leo, positioned in the very core of Summer (July 23-August 22) is considered to be a pure fire element. However, Aries (March 21-April 19) is in a seasonal Spring transition from being wetter moving toward hot and dry.

On the other side, the Autumnal Sagittarius (September 23-October 22) is in the hot and dry moving toward cold and dry. One pure Element of Summer Fire bookended by transitioning seasons of Spring into Summer and Summer into Autumn. This accounts for the very different self-directed personality traits of the Zodiac Fire Element triplicity, yet all share in the commonality nature of a singular Fire Element sign.

Aries are ruled by the First House of the Zodiac. It is not surprising that being “#1” incorporates fire element personality traits that center on being first. Ruled by a “Personal House”, Aries are concerned with issues centering on the self. These include first impressions and how they appear to others physically. Their preference is to lead rather than follow, which means you will generally find Aries in positions of leadership.

The Ram as the Aries symbol represents their desire to address life “head on.” They embrace change as an opportunity for new beginnings. Aries are known for their, “Let’s Do It!” attitude, as well as a “one track mind”. Aries thrive in competitive circumstances but can be overbearing if they make every situation about their winning. In their relationships, Aries wants to be #1 in the lives of their partners and coworkers. Their fire element comes in to play with their fiery intensity to be first. The downside is found in their taking on more than they can handle and then eventually their fire “burns out”.

Leos are ruled by the Fifth House of the Zodiac. Leos are the dramatic and fun-loving members of the Zodiac. They are represented by the Zodiac symbol of a Lion which reflects their innate pride and leadership. Leos are known to crave attention, especially from an audience. A plethora of celebrities in all forms of creative pursuits are Leos. The Fifth House is a Personal House which oversees passion, drama, romance, love, fertility and self-indulgence.

Leos, both male and female are considered the sexiest members of the Zodiac. The Fire Element is assigned to Leos due to the fact that they burn brightly and tend to radiate light wherever they go. However, the downside is their ability to burn others who don’t go along with their program. They can be overbearing and even bossy in pursuit of what they want. “Over the top” Leos are known to be vain, controlling and egotistic which is so often evidenced in celebrity divas who believe their own press releases.

Sagittarians are ruled by the Ninth House of the Zodiac. The Ninth House is an Interpersonal House. Their fire sign is evidenced in their pursuit of enlightenment, the “light” of a higher mind supported by interests in academic pursuits and broadening experiences. Very often they are recognized for their high level of intelligence. They “burn” with a desire to travel, take risks and inspirational adventures.

You will find Sagittarians in higher levels of academia, as well as in cross-cultural situations. As a rule, Sagittarians live by high moral and ethical standards. They can be difficult to be around if they are overzealous in these beliefs. They have little patience for people who want to accept the status quo. At times, their risk-taking can produce issues with gambling. As always, life is about maintaining a balance between the upside and downside of human traits.

Balancing the Fire Element Within The Four Elements of Astrology

As mankind continues searching for the meaning of existence, so too have they struggled to maintain balance in their lives, especially since life has become increasingly more stressful and complicated over the millennia. The Four Elements of Astrology are inextricably intertwined. One is interdependent upon the other, as there is a need for all 4 elements to sustain life.

Although one’s Zodiac sign and the element is determined by the date of their birth and the season in which their Zodiac sign falls, this does not preclude the preeminent influence of the Water element, Air element and Earth element as well for maintaining life balance. As important as a primary Zodiac sign and their element are to explaining patterns of behaviour, it is equally important to consider the other elements as well and how they fit into the overall astrology information equation.

The very nature of Fire Element personality traits presents balancing issues to those graced with this element. Although each Fire Element Zodiac sign is different, there is a commonality in their passion, commitment and enthusiasm for pursing their self-motivated interests, whatever they may be. All fire Zodiac signs want to be perceived as being at the “top of their game”. The counter to this are the dangers of an imbalance of intensity resulting in being too impulsive, too impatient, too demanding, taking imprudent risks and an overall proclivity for “burn out”. An imbalance in the fire signs tends toward negatively impacting relationships.

Volatility is a key aspect in the Element of Fire. They are all ruled by the most powerful planets in the Universe. Aries, is ruled by Mars, the God of War in Roman Mythology and Ares in the Greek. As there are many positive patterns associated with the Zodiac sign of Aries, imbalance generates a desire to go into battle to achieve their “First Place” status. This spurs anger and aggression, not only for themselves but in those who are negatively impacted by their “fire”.

Leo is ruled by the Sun, arguably the most powerful planet. The Sun is considered the pure fire sign as it is the hottest and brightest. It is widely known that Leo’s aspire to be the hottest and brightest within their own realms. Establishing and maintaining calm in their lives is a struggle for the Leo fire signs. The danger lies within their fiery egos, which feeds their desire to radiate and shine in all circumstances. However, an imbalance of ego also upsets the delicate balance within the psyche which can lead to impulsive and damaging behaviour to themselves and others.

Sagittarians are ruled by the planet Jupiter, the largest planet, which is named for the King of the Gods. Sagittarians are known for their pursuit of knowledge in order to gain insight into their surroundings. The Fire Element of Sagittarius also tends toward adventure and taking risks. As the Sagittarian pursuit of learning and knowledge has benefited humankind, an imbalance can produce “high-mindedness” which shuts down learning in the belief one already knows best or knows all they need to know. Obviously, imprudent adventuring and risk-taking can be devastating depending upon the circumstances.

Self-Awareness and the Four Elements in Astrology

The value in the study of Astrology and/or seeking the support from Astrologers is found in gaining knowledge of one’s self, which gives meaning to their existence. It is said that, “Knowledge is Power”. Knowing the behavioural patterns in the Zodiac signs and their elements supports manifesting destiny as ordained by the celestial heavens. Understanding the pitfalls in certain behavioural patterns, especially in the Fire Element personality, in order to avoid them in the sense of being, “forewarned is forearmed”, is equally important to maintaining metaphysical equilibrium.