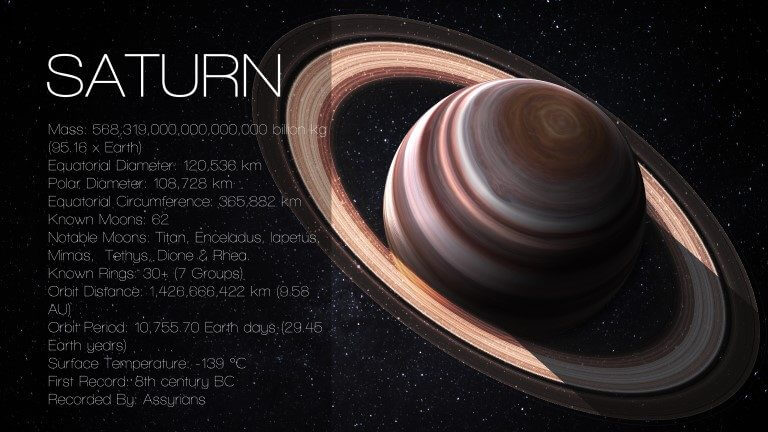 In astrology, Saturn planet constricts as compared to Jupiter that expands. It is linked with authority figures such as fathers for it sets rules, discipline regulations and limitations. Saturn, by setting these allows individuals to understand the world better so that one can grow successfully.

While the planet Saturn looks depressing; it is responsible for giving clarity in our lives. In the chart, the Saturn sign indicates ones fear, restrictions and duties. Saturn symbol represents a sickle. The signs ruled by Saturn are Capricorn zodiac sign and Aquarius zodiac sign.

Role of Saturn in Astrology

An individual under the influence of Saturn in astrology has to work relatively harder in his life. Saturn takes around 28 to 30 years to encompass twelve zodiac signs, and it stays in each zodiac for nearly three years. Saturn is commonly referred to as Lord of the Rings or Father Karma for good reasons which you will soon discover.

To begin with, the role of Saturn is not a very positive one in our lives, but this does not make it a less valuable planet. Instead, the lessons learned from it make it one of the best planets. Thus, while initially, it appears to be cruel it gradually becomes kind.

The position of Saturn in your chart will signify your hardest lessons, your areas of success, your approach to relationships, associations, leadership and how you react to limitations and responsibilities.

Just like a personal trainer, Saturn in Astrology will tell you the areas where you will be tested and how you can turn them into your advantage. The constant counseling will surely keep you on the right path and towards the right direction.

As mentioned before, Saturn is the ruling planet of Capricorn Zodiac Sign. It is largely associated with helping people in fulfilling their tasks, constantly guiding them when they are underperforming in any way. Saturn in Astrology covers all important aspects including success, career, and money. To best understand your area of success, the key motivating factors and how to take charge of responsibility, it would be very useful to know where Saturn lies in your natal charts.

The planet Saturn also introduces you to a number of life lessons to learn from that largely helps you to grow. It is Saturn zodiac that makes you believe that you can change your destiny. Saturn in astrology is concerned with age and long life, hence Saturn horoscope largely emphasizes longevity. Moreover, the power of Saturn in astrology is significant because of Saturn Characteristics. It prefers obedience and discipline over disobedience and chaos.

Saturn is the farthest planet from Earth, and one can only see its features with the help of a telescope. Among all the planets, Saturn is the unique one. It has been known for a long time and being a rich source of scientific discovery it still holds many mysteries.

The best of its feature is Saturn’s rings. While Uranus, Neptune, and Jupiter also have rings, Saturn is believed to have the most amazing rings.

Saturn is mostly made of hydrogen and helium. It is approximately 95 times the mass of earth and can easily hold 760 Earths. After Jupiter, it is the second most massive planet. At the same time, relative to other planets, it has the lowest density.

In Saturn’s atmosphere, colored bands are made visible when extremely fast winds occur in the upper atmosphere. These winds sometimes go up to 1,100 mph (1,800 km/h. The planet Saturn completes a rotation in 10-and-a-half hours, proving to be the fastest planet after Jupiter.

Once in every Saturn year, titanic storms are likely to occur in Saturn’s atmosphere. This explains the changes in wind and temperature of Saturn planet. Physical Saturn Characteristics makes it magnetic field more powerful than other planets such as Earth.

Saturn being the largest planet after Jupiter in the solar system, its strong gravity field helps determine the fate of the system. It is also believed to turn debris and attract it to the inner planets to prevent any destructions. Saturn, hence, makes sure to keep harmful asteroids far from earth.

This planet is largely known as the Lord of Karma. The ruling planet is strongly based on, “We reap what we sow.” This is what scares people when it comes to Saturn in astrology. However, we can change the circumstances in our favor, if we understand the Saturn planet well. It regulates our legacies and lifetime achievements. Saturn in astrology helps one in deciding their careers as the ruling planet discovers interests that are worth all the effort.

Saturn in the houses

The position of the Saturn in a specific house of the natal chart is responsible for changing the characteristic of the respective house. Saturn in Astrology holds an extremely important and influential status. It’s meaning is best described as reality, and this is why it gives meaning to life. This planet is the ultimate cure to the creative change resulting from Uranus and fantasies coming from Neptune. Saturn characteristics give direction and meaning to the creative change.

At the same time, by accepting Saturn and the time and efforts it demands, one might be able to achieve their wildest dreams and fantasies.

What does Saturn mean in a particular house is very interesting. Below is the detailed understanding of the position of Saturn in Capricorn zodiac sign and Aquarius zodiac sign.

Saturn in Capricorn makes you take your work seriously and cautiously. Regarding your “fathering” role, you will look into the growth and development of your child. Similarly, at work, you will make sure things are going smoothly. In any case, you will take your work very seriously, and it would be based on reality and practicality.

Since you will be more aware than most of the others, self-consciousness and defensiveness might be experienced. People in this lying here tend to take up a lot of responsibility. This is not always good and healthy and so let others take their share of responsibility.

Saturn governs a number of relationships including the ones with your family, friends, neighbors, people at the office, etc. The influence of Saturn here is very similar to its influence in Libra, except that the relationships now vary in nature. You might not be good at socializing and hence, might prefer isolation. Such people are likely to get uncomfortable and conscious very easily even in casual relationships. The fear of failure is also very much evident.

Another reason for people in this house preferring to stay alone is that the sense of responsibility as a friend might prevent you from forming associations. You may think that this would burden you too much. Isolation is not always good; hence, find some good friends to hang out with occasionally. Don’t forget you have the traits of loyalty in you.

Other than relationships, Saturn is connected with future hopes, dreams, and aspirations. Saturn Planet here might enhance the fear of failure which is the only thing that prevents you from fulfilling your wishes. Thus, hold back this fear and continue to work towards your goals and dreams.

What does Saturn mean in Astrology?

Saturn is all about breaking you down and then lifting you up with full swing. The words “Personal trainer” or “Coach” are repeatedly used for Planet Saturn. This is because while it breaks you, it constantly guides you to the point where you can achieve whatever you desire for.

Astrological Interpretations show that Saturn in a particular house especially the second one signifies trouble in obtaining worldly possessions such as cars, money, etc. Keeping in mind an individual, the position of Saturn zodiac shows how an individual views these possessions.

The chances are that one might be highly pessimistic when it comes to obtaining these obsessions. The advice here is to avoid the negativity. Moreover, such people are rather risk averse and then risk lover. They will end up investing the money that involves minimal risk. Now, this could be an advantage or a disadvantage too.

The good part is that the investment will remain solid, but the bad part is that since the individual does not like to take risks, the investments will not grow by much. Hence, being risk averse is what prevents one from achieving worldly obsessions. Once, an individual understands this he or she can achieve whatever they wish for.

The personality of a Saturn Zodiac

Saturn is concerned with a sense of responsibility combined with limitations and restrictions. This explains why such people might have a different interior and exterior outlook. Saturn in a particular zodiac sign accounts for a number of responsibilities and people will have a great pressure of living up to the expectations and demands of the people. Proving oneself would be difficult, and even on the least important issues, the feeling of anxiety and guilty would be prevalent. This might result in false attachment to people or things around to the extent of obsession. You might become, and any work or task may look difficult to accomplish.

To prevent this, fight the anxiety and guilt and think positive about yourself. The best way to do so is, go easy on yourself and take things lightly. Moreover, since Saturn is initially more of a cruel planet before it moves towards kindness, there is a constant need to have someone by your side that will make you feel comfortable and good about yourself.

Another common trait of a Saturn zodiac is the failure to see his or her capabilities. Saturn could explain this as a result of something that happened in early childhood that prevents you from moving forward. People belonging to the position of Saturn in especially the twelfth house go through guilt and anxiety.

They fail to understand the reason behind their guilt and anxiety, not asking for help from others because they think this will only make them more vulnerable. They prefer to handle their issues and problems themselves. The advice here is to learn to accept yourself and start talking to people who love you. They might make you feel better. Stop escaping from the world, and accept things as they are in order to live a peaceful life.

Concluding remarks on Saturn in Astrology

Saturn in Astrology remains to be one of the most powerful planets. Hence, refusing to accept its counsel is not going to be healthy. The guidance provided by Saturn in Astrology must be looked upon to prevent trouble and achieve the best version of you. The planet will help you make the most important decisions of your lives from your career to your personal relationships. Symbol of Saturn itself represents reality.

Moreover, there is no denial over the fact the fact the Saturn’s counsel will only take you close to reality and practicality. So, about to make big decisions or thinking of a fresh start? Don’t be afraid. Here, you will find everything you need to know about the ruling planet, Saturn in order to succeed in whatever direction you wish.