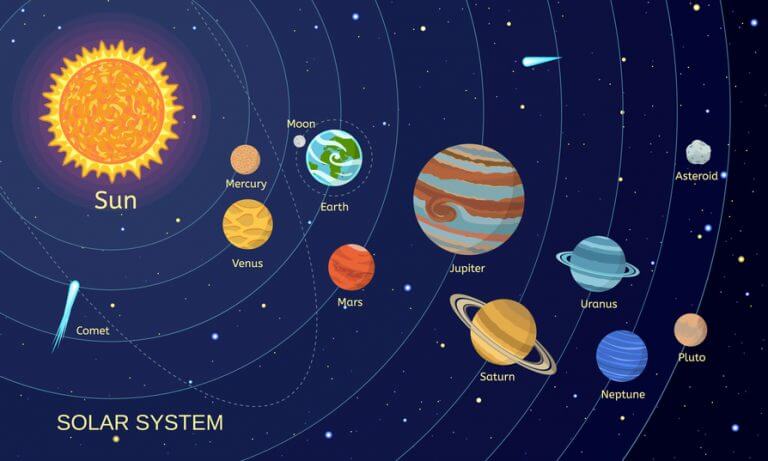 Anyone with even a little interest in regular astrology understands how important the role of celestial bodies is in it. For people who jumped right on to this page for information about the sun in astrology, let us give us a little background first so everything falls into place as you get set to read an in-depth article about the sun. Celestial bodies, as astrology sees them, are all the huge (and small) bodies out in the space other than the earth which directly influence the happenings on planet earth.

This stems directly from the philosophy of astrology that claims as above, so below. These celestial bodies consist of planets, the regular ones as well as the dwarf ones, coupled with the sun and the moon. The sun thus plays a very important role in astrology, as visibly, it is the largest of the celestial bodies in our solar system, and therefore has an impact like no other. The main purpose that the sun planet in astrology harbors is to keep providing energy for all the souls so that they never give up in their pursuit of life.

The Sun in Astrology

As you may already know, everything that an astrologer derives about you comes from your natal chart, which is a map showing the positions of all the planets, the sun, as well as the moon at the time of a particular event, such as your birth. The sun’s role in this birth chart is simple; to power our drive in life and keep it supercharged all the time.

This is specifically why astrologers deem the sun so important because it is the only entity, which if strong, can bring about a very positive change in one’s life regarding creativity, courage, as well as influence. However, weak sun sign astrology represents a life without vigor and energy, something that needs a lot of foreign sustenance as it is unable to generate energy on its own.

Is the sun a planet?

If you are a scientist studying the solar system, then no! The sun is a giant ball of fiery hot gases in strictly scientific language, or a star if you prefer simpler language. However, if you are an astrologer or an avid follower of astrology, then yes, the sun is indeed a planet. So important is the planet sun that it has been given the prime spot in the natal chart, as mentioned before. All of this knowledge takes root from the celestial body concept, which has been duly discussed before.

Characteristics of the Sun

Just like every planet (or celestial body, whichever way you put it) rules over a certain zodiac sign, the sun rules over the Leo zodiac sign. We would require you to recall your third-grade science now. Remember when you first studied about the solar system? Everyone must have been so fascinated to learn how different planets exist and how so many earths could fit into one sun. Being very honest, that notion can’t be exaggerated enough even if we tried.

Although Jupiter is known to be a huge planet in the solar system, that it is larger than the earth by many factors, but the sun is on another level. It is so huge that is effectively forms more than 90 percent of the physical solar system! There are two perspectives that people generally harbor with regards to the sun. One is that it is at the center of the entire universe as we know it. This makes it a very important figure as the whole life as we know it, revolves around it. The second opinion is that of the astrologers, which talks of the sun as one of the supreme celestial bodies that have a pioneering role in anybody’s birth chart.

Sun signs and how important they are

This is another factor that greatly highlights how important the sun in astrology is. It would be a great loss to negate, or even ignore the sun’s presence in one’s life. The prime example of this is how the zodiac sign that every person refers to is that of the sun. Proving this statement with a little background is, we feel, necessary.

All the celestial bodies are going through zodiac signs at any given point, and they are not all the same. For instance, Venus could right now be in Libra, while the moon in Taurus, only an astrologer could tell you better, or the online mapping tools. However, what is important here is that when a person is born, his natal chart is drawn up, showing very clearly each of the planets and the signs they are going through.

However, when a person says that he is a Taurus, it means it was the sun that was going through Taurus at the time of that person’s birth. The mere fact that the sun in astrology is taken to be the primary zodiac sign for everyone is enough to show how important it is. The July sun sign is generally taken to be Cancer, just like we explained earlier.

What does the sun represent?

Quite frankly, and if the answer could be something that didn’t answer anything, the sun represents everything. Yes, we were as confused as you are the first time we thought about it. But give it time, and it begins to settle in. The sun is the ultimate sign of energy, life, youth, and all the things that come with it. In its essence, the sun goes on to represent life, and that in its actuality, indeed is everything. But let us come out of philosophy for a while and focus on hard hitting facts.

Like we mentioned before, sun astrology puts Leo under the sun’s influence. This gives anybody born under the strict influence of sun a great deal of Leo qualities. Moreover, Leo is also sometimes known as the August sun sign as it stays with its influence over the sun for a major part of the month.

The Sun in Astrology against the others

While one should never undermine the other celestial bodies in favor of the sun just because it is taken to be the primary sign, it is indeed an important fact that the astrological sun signs always take precedence. When comparing the sun to other celestial bodies, or planets, the sun goes on to be the sole representative of the here and now. Some astrologers also hold it responsible for self.

All in all, it comes down to the same thing in the end. While other planets and dignitaries emphasize on spiritual qualities like health and the mind, the sun focuses on the functioning of the present! A typical example is that of the moon. The moon tries to make a raise in one’s emotions by stringing feelings from the past as flashbacks. Astrologers believe this to be a great morale booster and motivator. However, the sun tries to take a different route here with focusing only on the present and providing energy to it for success. See Moon horoscope for this month.

The sun has been at the center of all, be it history, myth or legend. If one inspects closely, the symbol for the sun has survived through so many civilizations and centuries that one can do nothing but marvel at its persistence. Historians relate the symbol of the sun to the ancient symbol of Jungian, which was the sole representative of individualization.

This brings the argument to close quarters as, throughout this entire narrative, we have been advocating for the sun in astrology to be a symbol of self, energy, drive, which all leads down the road to one thing only: individualization. And to think of it, it is nothing but totally ironic that the path we have been clearing for so long to find the ultimate answer had been discovered and lay ahead of us since the times of Jungian.

Furthermore, this intensifies the plot by relating the sun to a protagonist in any story. It is important to mention here that the sun is not directly relating to the protagonist. It is the protagonist’s drive towards success, his energy and conviction to find his true potential that is represented by the sun and its symbol of individuality. Like all stories go, the protagonist has to go through hurdles and obstacles to achieve his goal in life, even if it is as clichéd as finding his loved one locked up in a tower. The sun similarly works on this drive for any zodiac sign and its struggles in life. Zodiac sun signs thus hold a very important position in a sun sign chart.

More about the role of the sun in astrology

While the sun does its job of sending light out in the solar system, its job in the astrological world is pretty much the same. This makes it not just a radiant body, but also a figure that is aware of its surroundings, and with the light, it casts, gives it a sort of a rational and equal-to-all demeanor. With everything out in the open, and holding transparency dear in all the matters, the sun makes it hard for astrologers to make it work with the symbolism offered by Neptune, Pisces, and the twelfth house.

The sun, if you ask any astrologer, is the sole representative of creativity, passions, and the motivation inside one’s heart to go out and make a name for themselves. At its height, the sun goes on to represent fame and stardom for the people who use it to their best potential. It is also related to foresight on many levels as foresight, too, is a necessary tool in the path to success and enlightenment.

Physical Changes that the Sun brings about

We have seen enough of the spiritual role that the sun plays in one’s lives, and how dominating a figure, it is in any person’s natal chart. However, the question remains, are there any physical superpowers that the sun might be handing out? It turns out there are, only you probably would not want these, at all.

For starters, that feeling when you know you will throw up in the next ten seconds, yep, the sun is behind that. We don’t mean the sun causing the feeling, of course, but that if you get seasick, carsick, homesick, or any kind of throw-up sick very soon, it is the sun that gave you this kind of control over your body metabolism. While many people deem it a boon as, admittedly, it does cause discomfort, and sometimes at moments when we surely don’t want it. But let us help you look at the positive side of this:

Looking towards the bright side

Have you ever heard of a sensor? They sense things. A temperature sensor will beep if the temperature of a particular appliance goes over a certain limit. A pressure sensor will beep when the pressure of your cooker goes over the top. Similarly, let us think of this ability of yours as a sensor, and it comes all thanks to the sun. This can be the first sign you learn to avoid certain things in life. After all, forbidden fruit is going to follow us till the very end.

Rest assured, the sun in astrology plays a role that no other celestial body does, with its constant overlooking, making your alarm beep before anything worse happens, and the constant supply of energy that everyone needs to make it big in life.