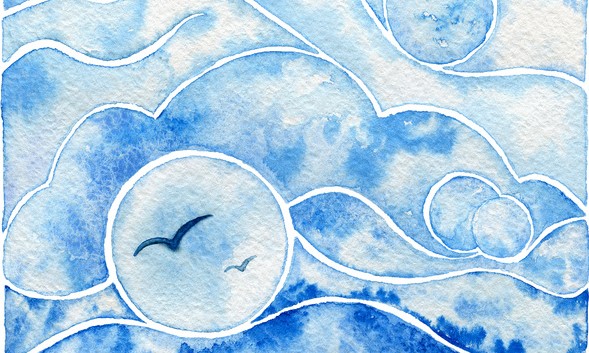 When determining what is what in astrology, it is important to recognize that the air element plays a crucial role for people born under three signs: Aquarius, Gemini and Libra. It is one of the four elements.  In terms of astrology, the houses in which the air element rules are the Third, the Seventh and the Eleventh. Air is one of the four elements of astrology: air element, water element, earth element and fire element. What usually surrounds those people who are lucky enough to be graced with this one of the 4 elements is that they carry a rarefied air.

The air element symbol is the marker of intellectuals amongst us. People with a store of the air element are invariably clever thinkers who are able to handle abstract reasoning smartly. These people love nothing better than analyzing, synthesizing and probing.  If anyone has a dilemma of any kind, they could do a lot worse than hand it to someone born with the element air in their sign. If they do they can just sit back and watch them go to work. Coupled with this ability to cut through the flotsam and jetsam and get to the facts is the Air Signs ability to communicate.

Associated with the element of air and most of the traits traditionally connected to that element can be found in Tarot (the suit of swords) too.

The Element of Air and the Zodiac

Individuals blessed with the Air element could be described as having an air element personality. They truly desire to spread the word, and you can almost guarantee that there will be no waffle, just succinct description and clever analysis.  People born under the air signs of the zodiac are perceptive, alert and filled with curiosity. When they view the world, Air signs will see lots of fascination and be able to understand the context of the situation, whatever it happens to be.

When it comes to air element symbols, nothing is seen just as it is. After analysis, an Air sign’s subsequent explanation will elucidate a deeper air element meaning. This is because people who are influenced by the element of Air are clever, innovative and inventive. They are equipped to see every side of an equation and are capable of gleaning the very best approach most, if not all the time.

With such a power of intellect, it’s important that their lives are balanced. This is why people touched by air’s zodiac signs and their elements can appear to be as fresh as a breeze in the summer, and howling like the winter wind at pretty much the same time. People blessed with the element of air are frequently calm and collected. But they have the capacity to turn very cold if they are upset in any way. There’s nothing to be gained – and a lot that could be lost – if an Air sign is baited in any way.

However, having issued that warning, it is a great positive that Air manifests itself in a very humane way. The people who are influenced by this element can easily understand others. They are simpatico and cooperative, objective, and helpful. They want to make the world a better place. They do not countenance prejudice and pride. They simply follow a bright, shiny idealism and by doing so they are able to accomplish a lot.
Beware though because Air Signs have the capacity to blow both hot and cold and because they are clever, intellectual and communicative they know how to make others feel the heat or a chilly blast.

Connections to the four elements of astrology

Air is the element that links all the other elements. It may seem less relevant because it is invisible but without it things would not be the same. Air can be found in all the other elements in astrology. It is what keeps the fires going, similar to how the Sun burns hydrogen. So air is a fundamental element in the phenomenon that is fire and it could be said that life wouldn’t be possible without Fire.

Air also enables us to breathe, helps to widen our lungs, and opens our lives to take advantage of the personal freedom. Out of the signs in the zodiac – Gemini, Libra and Aquarius – it should be noted that two of them are known to have problems with the Sun. Libra takes it to fall while Aquarius takes it to detriment. The reason for this is that the Sun keeps everything circling around it in order, and this conflicts with Air, which needs to be free in order to circle the whole Universe.

When the bigger picture is taken into account, it’s clear that people who are born under the strong influence of the air element sign are bound to have issues with the regular order of their lives and surroundings. It does not matter whether this is a country or a workplace.

The biggest challenge each of us faces as far as Air is concerned with finding a firm ground and coming to terms with the importance of our bodies.  We all have a strong tendency to stay in higher places, where all things are lighter and everything seems possible. It’s not easy to find ways of implementing all the ideas, intelligence and knowledge that come from people blessed with the Air element and applying them to practical things and making them come alive.

If we are to succeed in our personal growth and holistic development, the most important thing for any Air individual is to start taking concrete and practical moves in the direction of fulfillment. If we are balanced by the Earth element we require a more healthy routine each day, for example where we have our meals at the same time each day, and use physical activity to stay in touch with our physical existence. If we forget to eat, for instance, the hole in our stomachs will affect any rational plans we may have had. It cannot be stressed enough that there is an importance to fulfilling our physical needs.

What are the air signs of the zodiac?

Gemini, Libra and Aquarius are all AIR signs. That is what they have in common. Air may be an elusive element which can be forgotten because in its purest form it cannot be seen. But it remains a significant element. As it is fundamental in the physical world, air is also extremely important in the astrological world too. Never forget that people born under any of the air signs are known to possessing many distinctive characteristics and traits.

To provide a better understanding of the air element personality in terms of astrology information about the three major air signs, it’s crucial to take a long, hard look at just seven of the ‘core’ personality characteristics and traits that constitute the three air zodiac signs.

Characteristics and Traits of Air Signs

Air signs are known to be very intelligent. Air does not imply ‘airhead’ by any stretch of the imagination. Indeed, all the evidence points to the fact these people are well regarded as being very switched-on examples of the human race and have minds that are almost always racing and pontificating deeply about one or other thing.

People blessed with the air element are able to process their thoughts with a lightning quick speed. They are also known to be able to come up with strokes of genius that have the capacity to revolutionize and change the world. These people are able to excel at just about anything to which they turn their minds. They are somehow enabled to flex their intellectual muscles and do well in the type of careers that tend to reward quick thinkers.

Air signs are hard to read

As with a powerful gust of wind that blows about the sky, people born under air signs tend to be swifter and more elusive. So much so that others, not born under an air sign, frequently find it difficult to understand them.
Because people born under an air sign very often inhabit their own minds they can appear as rudely detached. This can make it very hard for the less fortunate to work out what precisely what it is that’s actually going on in their heads.

In the world of astrology information, air signs are taken to be the best communicators of all the zodiac’s signs. Each possesses a unique gift for linking up with and connecting with their fellow men and women. For example, the Gemini personality can be very effective when it comes to one-to-one communications. People born under that star sign are capable of sparking some fascinating and rewarding conversations.

On the other hand, Libra’s personality allows people under that sign to work well in groups. They also have a talent for leading teams to victory. Aquarians are able to uniquely connect to just about every type of person and understand every concept, no matter how foreign or abstract.

People under one of the signs of the air know how to have fun, letting their hair down so they can have the best of times. They are invariably keen to enjoy a decent distraction from the everyday lives that can so often feel repetitive.  Armed with spontaneity and an adventurous streak these people are driven to always seek out exciting new experiences. As a result, they make for the great company thanks to always being able to come up with the best fun things to do and keep everything from becoming too blasé.

Air signs make decisions with their heads not their hearts

People born under the air signs are critical thinkers, so instead of making bad decisions based on emotions, they opt for applying logic and calculations to make their choices with the help of their brains. Facts and the truth are what guide them. They are always able to weigh up the pros and cons before taking important decisions. In addition, they have the capacity to detach themselves from any issues which enables them to analyze situations with the most objectively and supreme open-mindedness.

People born under one of the air signs can be among the most inquisitive personalities in the whole zodiac. They are constantly asking deep philosophical questions of themselves while also thinking about life’s greatest challenges. Sometimes these people are so contemplative they lose themselves in their own thoughts and almost totally forget about the rest of the outside world.

All of the three air signs are known for being free-spirited. These people are the kind who will live life purely on their own terms. They will not be the ones trying desperately to conform to other people’s standards or rules.
People born under Libra, Gemini or Aquarius don’t react in a good way when anyone tries to control them or to put their own rules and expectations on what should and shouldn’t happen. People born under the Air signs, with all the freedom that implies, need their own space to think and act in the way they think best.