The Suit of Swords Tarot Cards 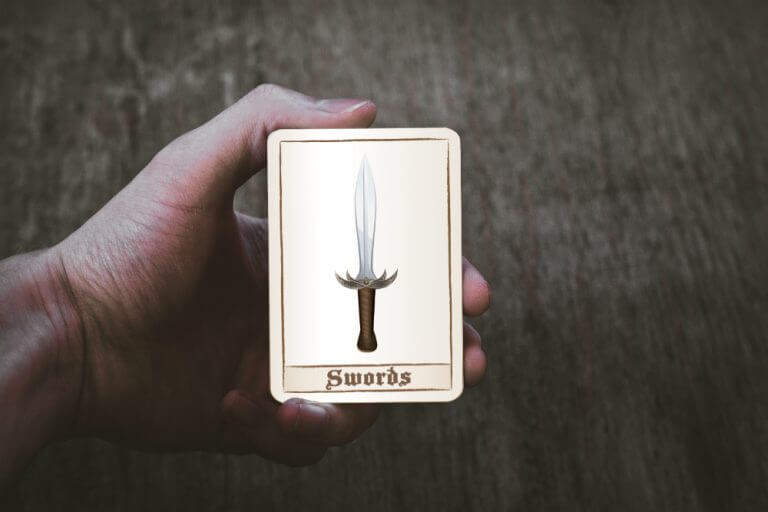 The divinatory tarot equivalent of the suit of spades in a playing cards game, this masculine energy suit represents anything related to the mind, like intellect, thoughts, and beliefs. Associated with the element of air, most of the traits traditionally connected to that element can be found in the suit of swords too.

Minor Arcana cards from the suit of swords in a reading

While the other three suits all represent some kind of subconscious drive or the importance of outside elements and factors, the suit of swords represents a deliberate, carefully planned approach, a desire to put “mind over matter” and make informed decisions instead of wild impulse automatic reactions. Like the honed edge of a sword, it represents a desire to draw a line somewhere, to focus on facts and logic and let your brain in charge. It does not cut you off from your emotions and environment but provides a system of checks and balances before any decision is made. The driving force of reason is a tool that can bring balance between emotions and primal urges in order to turn them into something meaningful.

The positive aspects of the Suit of Swords

A majority of the suit of Swords cards drawn in a positive context usually means that the Querent will avoid any rash decision or mistake that might have been made as a consequence of spontaneous and swift decisions. It highlights the use of knowledge and past experience to understand any situation and deduct the probable outcome of various possible reactions to that situation.

The use of our mind and brain is one of the major differences that set us apart from most other species in the animal kingdom. Education, experience, and knowledge should be essential to any decision-making process, though it is sadly obvious that a return to gut feelings and rash reactions is currently on the rise on a global level.

The suit of swords also highlights the overall education of the Querent, as well as an academic interest or pursuit. Combined with cards from the other suits, it might use the power of the mind to reinforce them and provide a source of courage, ambition, and righteous action.

The negative aspects of the Suit of Swords

The downside to the suit of swords, when many arcana are drawn reversed or combined with other negative cards, represents any use of the mind without reason. It could be a sign of deeply set beliefs or principles that are never put into perspective anymore, usually doing more harm than good. In a legal context, this might be a sign of a judgment that relies on the letter of the law instead of the law’s actual intent, a refusal to put things into perspective or consider the context of any action of decision in favor of a more conservative use of tradition used like a hammer without any thought or care for the eventual consequences of these decisions.

They excel in social situations, and while they don’t necessarily crave a leading position in a social or professional context (though they are perfectly able to fill one), they are probably the best advisors in any context and their opinions and advice should not be ignored.

The Ace of Swords can also represent any positive aspect where the mind has to play a crucial part, like communication skills, knowledge, or the objective use of justice, weighing pros and cons in a neutral way to provide a fair sentence (literally or figuratively).

Most of the time, the presence of the Two of Swords suggests that the situation is in an impasse and that the subject is unwilling to commit to a decision, one way or another. They are feeling conflicted, or need more facts and data to make their choice.

The pain experienced by the subject is stunning them into passive suffering.  Conversely, depending on context, a reversed Three of Swords could also represent the subject of the reading deliberately inflicting emotional pain on someone else, being the perpetrator instead of the victim.

When the Four of Swords is drawn next to more ominous tarot cards, however, it should be seen as some kind of warning that rest and relaxation are of primal importance in the current situation to avoid reaching a breaking point, advising you to stop before it is too late.

Just like the “no winner” conflict detailed above in the more generic Five of Swords meaning details, in context it generally means that no one will readily admit being wrong in this conflict, and will have a hard time projecting themselves in the other person’s shoes to try and see their side of the argument.

The core element that must be understood from the Six of Swords meaning is one of transition and change. Just like the characters on the boat, the situation is currently evolving from one stage to another.

The Seven of Swords is the kind of minor arcana you might prefer not to see drawn in any reading or spread specifically dealing with love or romantic life. Indeed, for a couple, it is a sign of deceit and lies within the context of that relationship, with one or the other person not being true and hiding things to the other.

The Eight of Swords highlights the presence of serious and complex problems, and like the woman surrounded by swords in the picture, the subject of the Eight of Swords in a reading can feel trapped in his or her current situation.

The Nine of Swords in a tarot reading focusing on life is just as bad as in any other context. The most common interpretation might be a slow erosion of any currently active relationship in the Querent’s life.

When the already extremely negative Ten of Swords minor arcana card appears reversed in a drawing, it brings about an almost melodramatic emphasis to the situation.

The core meaning of the Page of Swords represents new ideas and concepts. The Page of Swords is full of curiosity and wants to use his mind and intellect in as many situations as possible. Good or bad, every new experience is an excuse to have learned something and grown.

The Knight of Swords represents someone that is highly skilled but also has the courage and will to use it. He is highly intelligent and motivated, ready to answer any call to action.

The Queen of Swords is a sharp-witted and efficient young woman, who refuses to limit herself to the position of a companion or be defined by the men around her instead of her own accomplishments.

The King of Swords is a wise and intelligent man in a position of authority, confident about who they are. He doesn’t need to prove himself anymore, and will often take his time before making any sort of lasting commitment, weighing pros and cons and taking an objective look at the situation before they jump in, even in love.

Final thoughts on the Suit of Swords

Mind over matter, reflection overreaction. The suit of swords embodies the use of your brain in any situation or context. Drawing meaning from experience, knowledge, and context, the suit of swords provides a reliable process that can filter the raw energy found in the suits of cups and wands, and the long-term cravings of the suit of pentacles, in order to make sense of it all and make informed decisions that will balance all sides of the equation as best as possible.