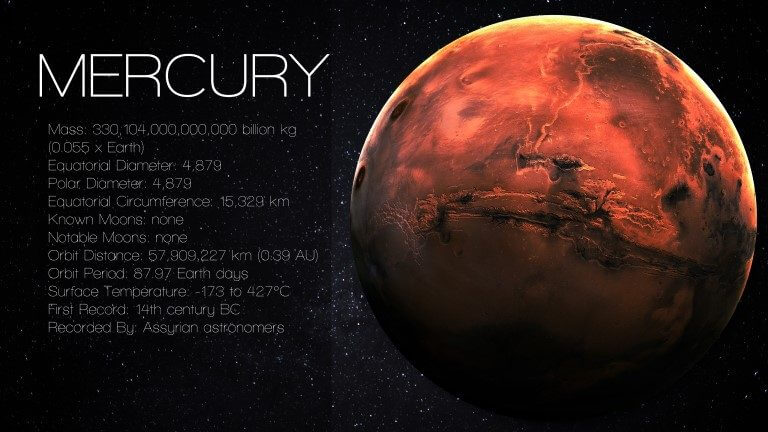 The role of the planet Mercury concerning the Earth has been a very interesting one. For starters, this is a planet closest to the sun. It has also been blessed with a special force in the sense that the solar system starts at its behest. Mercury in astrology may have a lot of meanings, but before that, there is so much to know only about Mercury as a planet. Even though one would consider it to be the hottest planet because of its closeness to the sun, it is not the case. Science answers this oddity by pointing out the fact that Mercury revolves around the sun at too fast a pace to absorb heat.

Instead, Venus bears the brunt of heat absorption, going on to become the warmest planet of our solar system. This very speed of Mercury becomes its defining characteristic, letting it bestow all the related qualities to the people born under its influence in astrology. In ancient civilizations, Mercury was confusedly believed to be two stars instead of one, because of its high speed. So was the case that it could be seen in the morning, and then again in the evening by astrologers! As a fact check, Mercury spins around the sun in a third of the time the Earth takes.

Ancient astrologers believed Mercury to have a great role in being the messenger of gods. This role came into being because legends formed around the fact that it is the closest planet to the sun. This fact was believed to give mercury energy beyond measure so it could relay the messages of the gods to as far as Pluto in the solar system. Other than that, Mercury in astrology can also be believed to be responsible as the information carrier from one level of existence to another.

This is one of the few special instances where astrology clearly and openly admits to the existence of another species in space that may be relaying its knowledge (through Mercury) to the human race. Mercury is also known for causing a dual nature inside the human brain, often bringing it at a crossroads of choice and then leaving it there. It is the other planets and zodiac qualities that subsequently help take a person out of such situations in the end. If we were to ignore this trickster habit for a while, we could safely conclude that Mercury is indeed the planet that shapes up a human being’s thinking process, enabling him to make a path to achieve his goals.

What does Mercury mean in Astrology?

Traditionally speaking, and in strict terms of astrology, Mercury rules the Virgo Zodiac Sign as well as the Gemini Zodiac Sign. These two signs help formulate a bridge between our physical and mental world. An easy way to perceive this for a layman is to think of a story. In any story, the protagonist faces a lot of troubles, a problem, that he needs to overcome. He ends up doing some tasks of bravery and valor to achieve his goal in the end.

In this story, the part that makes the protagonist realize how important it is to be brave, that it will be useless sitting with one’s hands in his lap, is the role that Mercury plays in his life. Furthermore, the part where he plans for everything that will happen, taking care of everything that could go wrong, is also at the behest of planet Mercury. This is perhaps the reason that astrologers terms Mercury to be the planet of communication.

A general recap to traditional astrology

It would perhaps be useless to go on and explain Mercurial meaning without giving the reader any proper context or background knowledge. Astrologers believe in a simple principle, and it has helped them achieve so much knowledge from the planets it even surprises them sometimes. The principle is that of as above, so below. This directly translates to the fact that everything that happens in our lives is a direct representation of how the planets move up in the sky.

When we say planets, we mean everything from the dwarf planets, satellites, the sun, as well as the moon. These planets keep going into and moving out of zodiac signs, which give a person certain qualities if one is born at dates specific to them. September horoscope, for example, is dominated by planet Mercury, and so is the June horoscope. All of this then comes down to another very important figure in astrology. Enter the natal chart.

This will be short. But it is equally important for readers who don’t know what a natal chart is to read about it before they move on. After all, what is knowledge if it is only understood partially? A natal chart is a graph that shows the positions of all the planets, or celestial bodies at any time given the location. This helps astrologers make accurate predictions of a certain event or how the personality of a particular person will be by seeing the ascendant and what sign each of the planets is in.

If a planet is in one of its signs, it always signifies a strong impact on a person. For example, a Mercurial personality will tend to be very strong regarding knowledge, information, and communication if one’s natal chart shows Mercury in Gemini or Virgo at the time of their birth.

What is Mercury known for?

As we would expect it to be, astrology, with influence from its ancient roots, tends to be very considerate of one’s personal life, especially the relations with family members. Any heightened Mercury signs mean very increased care for one’s family members. A heightened sign in astrology means as we discussed before, a planet being in the position of a zodiac sign that it rules over.

In such cases, Mercury going through Gemini plays a particularly important part in the struggle for family members. This is because Gemini is one of those Mercury zodiac signs that invoke special love for a sibling and in particular a brother.

As science has it, Mercury is the closest planet ever to the sun. This puts it in a position that many astrologers find pretty easy to explain. Astrology knowledge has a very simple notion that since the sun is in the center of everything, it knows everything. And with the great light it radiates to illuminate the entire solar system, it has thus an eye on everything that goes on, giving it a sort of an all-knowing demeanor.

With Mercury being a planet that is in constant view of something as full of knowledge as the sun, astrologers term it the gate that opens to knowledge. This comes about the fact that Mercury astrology has achieved full awareness, more than any other planet could and now has the responsibility of passing it on. In simpler words, Mercury is the manifestation of all the choices one makes in life because they are always in light of one’s knowledge of a situation.

As an extension of what has been said before, it is very important for you to understand how Mercury plays a role in not just knowledge, but a person’s perception of it. Mercury is the planet that truly embodies knowledge and information within a person. So much so, that when you try and form an opinion about a person from the way he dresses, walks, or talks, it is all down to how that person’s Mercury has been working.

It is a pretty easy challenge when it comes to astrologers, but anyone who makes you feel like they are a very knowledgeable person, someone whose demeanor speaks of information and education, must have a very strong Mercury in their natal charts, which can be confirmed with any astrologer or online natal chart generator given that you have the necessary information.

Another very important characteristic of Mercury is that of its duality. We barely poked it earlier in our example that this planet likes to bring people on a crossroads in their quests of life, let us now explore that side in detail. This characteristic is not just unique, but also probably the most dominating one that Mercury has seen so far. In one’s search for an answer regarding anything, be it as simple as a college thesis, or something as big and important as one’s purpose in life, Mercury always tends to make one grapple for information in multiple directions.

While it may be true that going straight in one direction (even if without any luck) might prove to be a better option because of the chances that at some point one is going to realize whether this method is workable or not, and can shape up the future strategy accordingly. However, with Mercury’s approach, astrologers see a pattern of variety and versatility of being able to handle two paths at one time.

Here’s the catch to this dual thought process

But wait, not always is this dual nature working in favor of a Mercury personality. When it is set in the 7th house, Mercury will be all set and have a person convinced to find their life partner in two people at the same time. Now we all know the dangers of dating two people behind their backs, yet a person with strong Mercury would only probably see this as either a safety net in case one goes wrong, or they will be in great mental distress when they have to choose one in the end. This is only one example of how this can cause troubles for not just oneself but also any other people directly associated with a Mercury person.

However, there are strengths to counter disadvantages like that. For instance, Mercury brings about a great sense of responsibility for its expert organizational skills. In the office, as your boss would have mentioned so many times, productivity only comes with the organization and being able to multitask efficiently. Both of these skills occur naturally for a Mercury-ruled person.

Some astrologers also call Mercury as a planet that owns movement. This is in relation to how fast it revolves around the sun. This fast revolution is one of the reasons science believes it does not heat up despite being so close to the sun. These facts greatly affect astrology too as a person goes on to take the same qualities.

People with strong mercury in their natal charts tend to be good at moving from one place to another at a pace faster than the normal person. It might even be so that such people find themselves serving the military as it is one of those jobs where you get to change your station every two years or so. However, this does not necessarily mean a life without any full stops. Mercury tends to be a very good settler too if the situation calls for it.

Before we go on finishing this article, it is important to understand that it is not Mercury alone that shapes up the astrological predictions on a natal chart. It only works in combination with various other forces and thus should be taken as such. Astrology is a branch of knowledge with still many doors unopened. And to open these, one needs to master each component separately, which is why astrologers put in so much effort with regards to each planet singlehandedly.