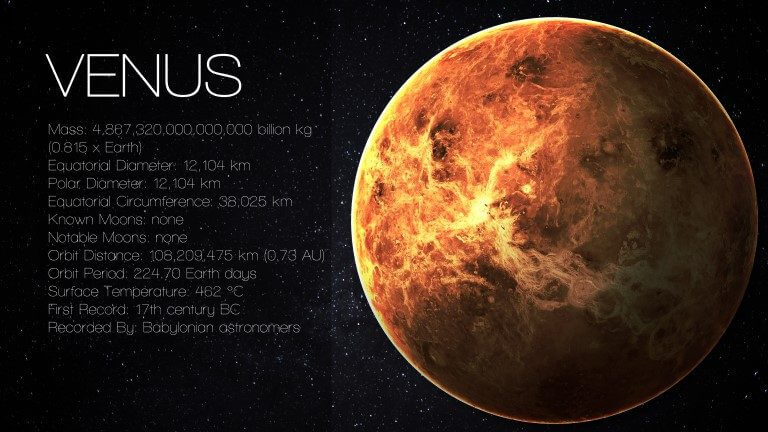 Planet Venus is the second one in order in our solar system, from the sun. Despite that fact, Venus remains to be the hottest planet in all of the solar system. Science explains this heat as a result of the very thick layer of atmosphere that surrounds the planet. Just like our earth, Venus has its own set of gases that inhabit the planet.

However, the content is so dense that it goes on to create the most efficient greenhouse effect in all of the solar systems. As it happens, all the heat directed towards planet Venus finds it very difficult to escape. Venus in astrology has a take that often finds itself in correlation to the actual behavior of the planet.

A Little More about Venus in General

Interestingly enough, it is the only planet in the solar system to be named after a female. Other than Venus, all planets have been given names that are masculine. This goes on to show that although limited, the female side does have its own representation in space as well as astrology. This not only leads it to be seen as a delicate entity by astrologers, but they also believe that it directly affects the feminine side of a human, one that cares and has strong emotions and willpower.

Another vital connection that astrologers make of Venus with women is how it has a thick layer of atmosphere hiding what is inside, never giving it away. Add to that the fact that it orbits the sun in a direction opposite to most of the other planets, and you have a true scent of a woman there. Venus also houses more volcanoes than any other planet in the solar system, as reports from scientists and astronauts claim. It being the closest planet to the earth (with Mars giving it a tough competition), Venus is the only planet that can be easily seen by the naked eye on certain days.

Just like we explained before, the feminine side is what the planet Venus is all about, and it goes on to do the same in astrology too. For people born when the planet Venus is in power, it is a common occurrence to have heightened feminine senses. In a more contextual manner, this enables a person to find joy in everything life throws at him and to unconditionally love people. These are the traits only a person with a pure heart like that of a mother or a wife possesses. The ability to look towards the bright side is also something that Venus incorporates into the people.

This can be explained better as in situations that people otherwise perceive to be negative and not in their favor, a Venus driven person can often come up with a perspective that is not visible at first but surely goes on to highlight the positive aspects of the otherwise worsening situation.

Looking back before we go on

It is important for a reader to be familiar with all that goes on in the world of astrology before moving on to something as specific as a planet. This is why we intend to sum up here all you need to know before you move on to reading more about Venus and all the technical terms that are associated with it. Astrologers have been gazing into the skies for centuries now to predict the future as well as offer solutions on how to proceed with life taking guidance from the celestial bodies.

All of this takes root from the simple belief: as above, so below. This roughly translates to the fact that everything that is happening on the earth is related to the planets above, in one way or another. This is precisely the reason why astrologers keep track of the positions of all the planets, which are believed to be in one of the 12 zodiac signs at any time.

What takes birth from all of this is the concept of a natal chart. This is the only weapon astrologers have in their arsenal to provide solutions to all your problems. It is important to know that this is not some chart that you can get a copy of to keep forever. The natal chart is a graph showing the positions of all the planets, the sun, and the moon at a particular time for a very specific location. This is why for every date of birth at a different time and place, a new natal chart has to be made. It also shows the zodiac signs that each planet is going through.

For example, Venus at its strongest would be passing through the Libra zodiac sign, but we will come to that in a bit. The natal chart is thus perhaps the most important figure in all of the astrology combined.

Just like we mentioned before, each planet is going through a sign at any given time. And a few of these signs are what some call the best match for each planet. In such a bid, planet Venus is the ruler of the Libra zodiac sign as well as the Taurus zodiac sign. This comes in order as the previous planet, Mercury rules over the Virgo zodiac sign and the Gemini zodiac sign. All in all, the Venus astrology sign is generally taken to be Libra.

There lie some problems for Venus too, as the signs of Libra and Taurus do not sit too well together. One prefers a balanced environment while the other goes on to be somewhat beauty-loving. This conflict can be illustrated again by saying how one prefers to work behind the curtains while the other only consider being under the spotlight to be the real work. In such relationships, it is often tough to find a compromising ground, and Venus becomes the first victim of it.

Characteristics of Venus: All about Venus

Venus in astrology is pretty much like science describes it. With the cloud cover, it has, astrology to thinks of the Venus people to be constantly shrouded in mystery. While this gives them an aura of grandeur and being above all others, it also earns them a repute of someone not to be trusted because, well, they don’t open up themselves, and it is hard trusting someone you don’t know a thing about.

On the other hand, to some people, this qualifies as a quality wherein they see being able to separate oneself from the world as a quality and not arrogance. The debate goes on between the two factions, but Venus remains unaffected and unhinged.

Again, as science tells you how Venus is the hottest of all planets, the human being associated with it is the same. Astrologers refrain from associating a typical hothead with Venus, the descriptions go something like what follows. The warmth that Venus has been harboring for centuries, coupled with the feminine nature that it uniquely displays, the planet helps form a warm fire inside a person that acts just the way a situation demands. It can keep on at a slow, steady rate to motivate all of life’s daily ventures. And it can also turn into a raging fire to deal with the troubles that life throws one’s way. This fire is also the reason for a warm, caring nature exhibited by the people of Venus zodiac signs.

What does Venus mean in astrology?

There are two directions that astrologers generally associate with the planet, Venus. One of these involves the emotional struggle of a human and how he has to remain steadfast in it. The other one is more inclined towards materialistic goals. It may be as big as trying to conquer a country or as little as a craving for chocolate. Let us explore both of these sides before we go on to explore the Venus planet symbol.

The Emotions in the Venus Meaning

In the typical ways that a planet goes on to show its true self, the greatest share of Venus is taken by the emotional level. It banks on the planet’s feminine side, oozing of love and care, just like a mother. While these traits are not unique to Venus alone, they certainly do form as large a part of it that no other planet comes close. Through love and devotion, Venus aims to inspire not just one person, but all of humanity. The question about how it is possible when a planet only controls the person is very valid.

Astrologers believe, that to win the world over with love, not much is needed except love. Think of the person who greets you every day. You already think of him or her as a nice person. He or she has already won you over to their side. Who is to say they do not do the same with every other person they meet? This goes on to show that with the power of love, Venus in astrology brings about influence and power and that too in such a pure form that it can hardly be misused.

The Materialism in the Venus Meaning

We explained how Venus influences the emotional side of a person, but at the same time, it does have its fair share of the outer demeanor too. There are, however, in this case, conflicts to resolve as the different signs of Venus in astrology tend to pull it in different directions. A Venus influenced by Taurus will always tend to go for the main course, or the most popular part of anything, while a Libra Venus would tend to favor the sweet dish or the true taste of celebration after victory is ensured. When both are combined, however, such as on a cusp, there could be no better combination as both the main course and the sweet dish are served.

Venus is also popular among astrologers as the planet of senses, which tends to go in favor of materialism. This is because all of our senses are built in that way. Taking only the example of the sense of touching, what will it touch if it has no material to hold on to? Similarly, to be able to smell or see something, it has to exist in material form! All of this does not mean that favoring materialism is a bad thing. There are two perspectives to materialism too, shown by astrologers.

Venus in favor of Materialism

Those in favor argue strongly that this brings about a very particular taste for fine things among those blessed to be influenced by Venus. One cannot strictly deny this statement because life, after all, is all about progress and what would be progress if not striving towards better standards of life?

You must have guessed where this argument is going by now. However, for the sake of clarity, let us make it. A run after materialism may make one greedy for more, as the influence of Venus grows. This can be supported by the fact that Venus only tends to give a taste of fine things, not abundance. And man is known to be greedy since he came into this world.

Venus as part of a bigger world

Before we finish, it goes without saying that even though Venus has a very important role in exploring the emotional as well as the material side of a human being, it is only a part of a very broad spectrum that is astrology. All predictions and decisions, therefore, can never solely be based on the movement and sign of one planet and need to be very carefully calculated from those of many celestial bodies. With that in mind, it is always good to learn in depth about individual entities to further explore astrology and to test the limits of one’s knowledge.